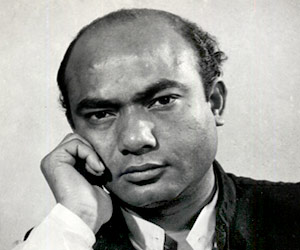 Ustad Ali Akbar Khan was one of the most accomplished Indian classical musicians, admired all over the world for his brilliant compositions and his mastery of the sarode. Ustad Ali Akbar Khan is considered by many as the "Indian Johann Sebastian Bach."

Ali Akbar Khan was born on April 14, 1922 in East Bengal (Bangladesh). His family traces its gharana (ancestral tradition) to Mian Tansen, a 16th century musical genius and court musician of Emperor Akbar. Khan's father, the late Padma Vibhusan Acharya Dr. Allauddin Khan, was regarded as the greatest figure in North Indian music in 20th century. Khan started learning music at the age of three. He learnt vocal music from his father and drums from his uncle, Fakir Aftabuddin. He learnt how to play several other musical instruments too, but finally decided to concentrate on the sarode and vocal.

Khan gave his first public performance in Allahabad, at the age of thirteen. In his early twenties, he made his first recording in Lucknow, for the HMV label. The next year, he became the court musician to the Maharaja of Jodhpur. He worked there for seven years and the state of Jodhpur bestowed upon him the title of Ustad. Several years later (1993), Ustad Ali Akbar Khan received the title of Hathi Saropao and Dowari Tajeem, at Jodhpur Palace's Golden Jubilee Celebration.

Ustad Ali Akbar Khan gave music in several films. These include: "Aandhiyan" by Chetan Anand (1953), "House Holder" by Ivory/Merchant, "Khudita Pashan" (for which he won the "Best Musician of the Year" Award), "Devi" by Satyajit Ray, and "Little Buddha" by Bernardo Bertolucci. In 1997, he was chosen for the Asian Paints Shiromani Award - Hall of Fame. He was the second recipient of the award, after Satyajit Ray.

Ustad Ali Akbar Khan left for the holy abode on June 19, 2009, in San Francisco (United States Of America), after suffering from a kidney ailment for quite sometime. He was on dialysis and his condition had deteriorated in the last four months preceding his death. He breathed his last at his music centre, at the age of 88. The Sarod maestro is survived by his wife Mary and eleven children, apart from his musical legacy that includes the Ali Akbar College of Music in San Rafael, California.