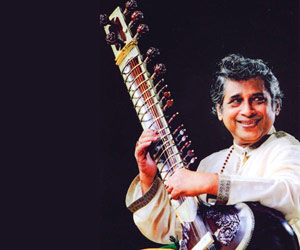 Achievements - Trained under Shri Panchu Gopal Datta and Sangeet Acharya Ustad Mushtaq Ali Khan from the Senia Gharana, Pandit Debu Chaudhuri is the leading Sitar exponent and a prominent personality in the field of Indian classical music in India. He is also the recipient of many national and international awards.

Pandit Debu Chaudhuri also known as Debu, is the leading Sitar exponent and a prominent personality in the field of Indian classical music in India. In order to highlight his contribution to the field of music, the Indian government presented him with the coveted Padma Bhushan award, which is among its highest civilian honor in the country. The initial training of Pandit Debu Chaudhuri happened under the late Shri Panchu Gopal Datta.

The next phase of sitar training that extended over a period of 38 years took place under the great exponent of Sitar, Sangeet Acharya Ustad Mushtaq Ali Khan from the Senia Gharana. It's the traditional school of Indian classical Music named after Tansen, who was among the nine jewels in the court of Emperor Akbar. Pandit Debu Chaudhuri is, thus, is like a torch bearer of this particular musical Gharana. Read further about the biography of Pandit Debu Chaudhuri.

Pandit Debu Chaudhuri is a person of many talents. Apart from being a Sitar maestro, he is also a composer of various melodious symphonies, author of three books and several monographs, academician and winner of many awards both national and international. That Debuji has spell-bounding control over the Sitar is due to the fact that he took to this instrument when he was just 4 years old. And his first public performance was at the age of 12.

Further the year 2002 stands underscored in the life history of Pandit Debu Chaudhuri as this was the 54th year of broadcasting on the All India Radio. It was also his 40th year of teaching at the University of Delhi, Faculty of Music and Fine Arts. Recent years saw Panditji get many more new laurels such as a special felicitation by the Cultural Centres of Delhi, Mumbai and Kolkata for his lifetime achievement in the musical sphere.

Pandit Debu Chaudhuri bags the credit of starting a unique project that consists of collecting rare instrumental compositions. When this dream project of Panditji will get over, it will be no less than a landmark in the history of Indian instrumental music. Other achievements of Panditji include delivering 87 lectures in 67 days at Sweden in the year 1984 on behalf of the Government of India and also participating globally in more than 70 shows.