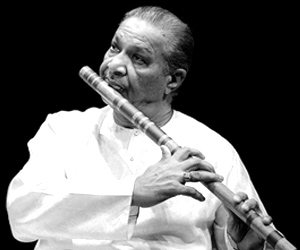 Pandit Hariprasad Chaurasia, is a world-renowned exponent of the bansuri or bamboo flute. He is one of those rare classical musicians who expanded the peripheries of classical music by taking it to the common masses.

Pandit Hariprasad Chaurasia was born on July 1, 1938 at Allahabad in a non-musical family. His father was a wrestler and wanted him to become one. Scared of his father, Hari Prasad Chaurasia learnt music secretly. At the age of 15, he started learning vocal music from Pandit Rajaram. After some time, he switched to learning flute under the guidance of Pt. Bholanath of Varanasi. Later on, while working for All India Radio, he received guidance from the reclusive Annapurna Devi (daughter of Baba Allaudin Khan).

Pandit Hariprasad Chaurasia has introduced several innovations in the art of playing flute. He has significantly expanded the expressive possibilities of North Indian classical flute through his masterful blowing technique. Hariprasad Chaurasia has also made his mark as music director in the Hindi film industry. In partnership with Pandit Shivkumar Sharma, he has given music in several hit Hindi films such as "Silsila", "Chandni", and "Lamhe".