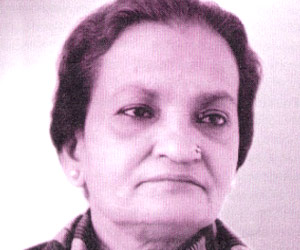 Born - 1914
Died - 1974
Achievements - Having received a rigorous training under various classical music exponents a good part of her growing up years, Beghum Akhtar took the musical world by surprise during the first public musical performance at the age of 15. Bestowed with good looks, she also got chance to act in several movies later on.

Though Beghum Akhtar had acted in several Hindi movies, it was her fabulous rendition of ghazals that won her laurels from all round. Born on 7 October 1914 in the small town of Faizabad in the Uttar Pradesh state, Beghum Akhtar was more popularly known as Akhtaribai Faizabadi. She nurtured a passion for music since childhood and as such, staged her first musical performance at the age of 15. Infact, her whole family was inclined towards music and encouraged her in this endeavor. Read further to know the biography of Beghum Akhtar.

Beghum Akhtar was hardly seven years old when she had first heard Chandra Bai, who was an artist working in a touring theatre group and became her fan. It was her uncle who opined she should be trained in classical music and was thus, put under the guidance of Ustad Imdad Khan, a great sarangi expert. After this, Beghum Akhtar got training from Ata Mohammed Khan of Patiala. The life history of Beghum Akhtar's musical training did not conclude here. She went on to learn music from exponents like Mohammad Khan and Abdul Waheed Khan of Lahore.

At the end, Beghum became the disciple of Ustad Jhande Khan Saheb. When she gave her first musical performance, her flawless rendition took the music connoisseurs by surprise. Her singing was also appreciated once by the famous poetess Sarojini Naidu during a concert organized to help the victims of Bihar earthquake. All the kudos pouring from every side encouraged Beghum Akhtar to sing more passionately and with renewed vigor.

It was then that she cut her first disc for the Megaphone Record Company and a number of gramophone records were released carrying her ghazals, dadras, thumris and so on. In the coming years, her ideal looks and lovely voice caused several film offers come her way. And it was when she was introduced to the yesteryears singers like Gauharjaan and Malakjaan that she made up her mind to taste the glamour of the Hindi film world with her mastery in classical music.