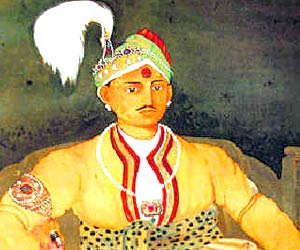 Born - 16 April 1813
Died - 27 December 1846
Achievements - Though Sri Swathi Thirunal Rama Varma was the Rajah of the ancient princely state of Travancore, he was also a great patron of music and a musician himself. He holds the credit of composing more than 400 musical compositions and even his palace accommodated many renowned musicians of his time.

Sri Swathi Thirunal Rama Varma was the Rajah of the ancient princely state of Travancore, which he ruled from 1829 till 1846 when he passed away. At the same time, he was also a great patron of music and a musician himself. Though he was himself an aficionado of the south Indian Carnatic music, he encouraged the people in his kingdom to pursue Hindustani music genre as well. Swathi Thirunal holds the credit of composing more than 400 musical compositions. His favorite was Padmanabha Pahi, Deva Deva, Sarasijanabha and Sree Ramana Vibho.

Here's more about the biography of Sri Swathi Thirunal Rama Varma, who was a master of many languages like Sanskrit, Hindi, Malayalam, Marathi, Telugu, Kannada, Bengali, Tamil, Oriya and English. Apart from his contribution in the field of music, the rajah also built up various renowned establishments like the Astronomical Observatory in Thiruvananthapuram, museum, zoo, the government press, Trivandrum public library that's now called the State Central Library, the Oriental Manuscript Library and other units.

The life history of Sri Swathi Thirunal Rama Varma's interest in music can be traced to his childhood. He strived to master languages in which he found good music. As such, his music training started with lessons from Karamana Subrahmania Bhagavathar and Karamana Padmanabha Bhagavathar. After this, he learnt about music from his English teacher Subbarao. He went on learning music just by listening to renowned musicians and practicing by himself.

It was this phase when music and other art forms were flourishing in various parts of South India. The triumvirate of Carnatic music, Tyagaraja, Syama Sastri and Muthuswami Dikshitar enhanced the music of this era. Infact, the royal palace of Swati Tirunal accommodated numerous musicians and artistes of the period like the renowned Thanjavur Quartet brothers, Tyagaraja's disciple Kannayya Bhagavathar, Maharashtrian singer Ananthapadmanabha Goswami and so on.