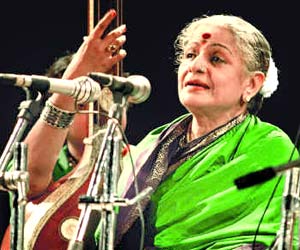 MS Subbulakshmi was a legendary Carnatic musician. She was popularly known as Nightingale of India. Her rendering of bhajans (devotional songs) was divine and used to enthrall and transfix listeners, and transport them into a different world

MS Subbulakshmi (Madurai Shanmukhavadivu Subbulakshmi) was born as Kunjamma in the temple city of Madurai on September 16, 1916. She was born into a family of musicians. Her grandmother Akkammal played the violin and her mother was a veena artist.

MS Subbulakshmi started learning Carnatic music from a very early age. She made her debut as a singer at the age of eight and went on to perform in concerts, a domain traditionally reserved for males. She began her Carnatic classical music training under Semmangudi Srinivasa Iyer and then Hindustani classical training under Pandit Narayan Rao Vyas.

By the age of 17, Subbulakshmi was giving concerts on her own, including major performances at the Madras Music Academy, the prestigious center for the study and promotion of Carnatic music. In 1940, she married T. Sadasivam, a freedom fighter, and a follower of Rajaji. He played a key role in advancing her career.

She also acted in a few Tamil films in her youth. Her first movie "Sevasadanam" was released in 1938. MS Subbulakshmi also played the male role of Narada in "Savitri" (1941) to raise money for launching Kalki, her husband's nationalist Tamil weekly. Her title role of the Rajasthani saint-poetess Meera in the eponymous film (1945) gave her national prominence. This movie was re-made in Hindi in 1947. The movie had M.S Subbulakshmi. sing the famous Meera bhajans, with Dilipkumar Roy as the music director. Those renditions by M.S. continue to haunt listeners to this day. Following the success of the film she quit films and turned wholly to concert music.

MS Subbulakshmi traveled to London, New York, Canada, the Far East, and other places as India's cultural ambassador. Her concerts at Carnegie Hall, New York; the UN General Assembly on UN day in 1966; the Royal Albert Hall, London in 1982; and at the Festival of India in Moscow in 1987 were significant landmarks in her career.

MS Subbulakshmi received many honours and awards. These include Padma Bhushan in 1954, Sangeetha Kalanidhi in 1968 (She was the first woman recipient of the title), Ramon Magsaysay award in 1974, the Padma Vibhushan in 1975, the Kalidasa Samman in 1988, the Indira Gandhi Award for National Integration in 1990, and the Bharat Ratna in 1998. She was also honored as the court-singer of Tirumala Tirupati Devasthanams.

After the death of her husband Sadasivam in 1997, MS Subbulakshmi stopped all her public performances. She had no children. MS Subbulakshmi died on December 11, 2004 after a brief illness.