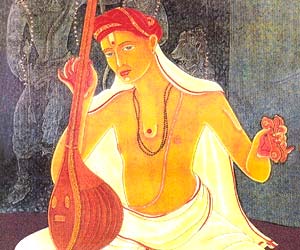 Born - 1767
Died - 1847
Achievements - Tyagaraja is considered the most legendary Carnatic music composer of all time, who played a very significant role in the development of this music genre. He saw music as a means to experience the love of god and as such, his sole intention was purely devotional while performing.

A discussion on Carnatic music, perhaps, can never be complete without the mention of Tyagaraja, who along with his contemporaries Muthuswami Dikshitar and Syama Sastri comprise the trinity of Carnatic music composers. He is regarded as the most legendary among the Carnatic music composers and is also said to have played a prominent role in the development of this musical genre. Tyagaraja created numerous devotional songs, most of which are devoted to the Hindu god Rama and are popular even today.

Read this biography of Tyagaraja to learn more about his life history. Whenever there's a programme in honor of Tyagaraja in present times, five of his compositions called the 'five gems' or Pancharatna Krithis are always sung. Tyagaraja received his musical training from Sonti Venkataramanayya, who was himself a distinguished musician from a very early age. The most unique feature about Tyagaraja was that he saw music as a means to experience the love of god. As such, his sole objective while performing music was purely devotional.

When Tyagaraja was merely 8 years old, he composed Namo Namo Raghavaya Anisham in raga Desikathodi. Then a couple of years later Sonti Venkataramanayya invited Tyagaraja to sing at his residence in Thanjavur and Tyagaraja sang Endaro Mahaanubhavulu, which is the 5th of the Pancharatna Krithis. His teacher was so impressed by Tyagaraja's song that he informed the king of Thanajavur about his unmatched singing ability. Following this, the king sent an invitation inviting Tyagaraja to attend the royal court.

Tyagaraja was not a seeker of wealth and fame and so he declined the offer to sing in the court of the Thanajavur king. He composed another gem of a kriti called Nidhi Chala Sukhama. But the brother of Tyagaraja was so irked due to his declining the king's offer that he threw all of his idol statues in the river. Unable to sustain the separation with his God, Tyagaraja set out on a pilgrimage of the important temples throughout India and composed ample songs in their praise.