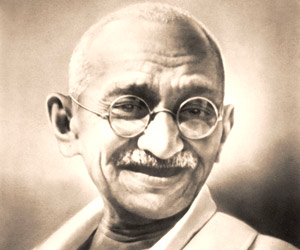 Born: October 2, 1869
Martyrdom: January 30, 1948.
Achievements: Known as Father of Nation; played a key role in winning freedom for India; introduced the concept of Ahimsa and Satyagraha.

Mahatma Gandhi popularly known as Father of Nation played a stellar role in India's freedom struggle. Born in a Bania family in Kathiawar, Gujarat, his real name was Mohandas Karamchand Gandhi (M.K. Gandhi). The title Mahatma came to be associated with his name much later. Before Gandhiji's arrival on the Indian political scene, freedom struggle was limited only to the intelligentsia. Mahatma Gandhi's main contribution lay in the fact that he bridged the gulf between the intelligentsia and the masses and widened the concept of Swaraj to include almost every aspect of social and moral regeneration. Paying tribute to Mahatma Gandhi on his death, famous scientist Albert Einstein said, "Generations to come will scarce believe that such a man as this walked the earth in flesh and blood".

Mohandas Karamchand Gandhi was born on October 2, 1869, at Porbandar, a small town on the western coast of India, which was then one of the many tiny states in Kathiawar. Gandhiji was born in middle class family of Vaishya caste. His father, Karamchand Gandhi, was a Dewan or Prime Minister of Porbandar. His mother, Putlibai, was a very religious lady and left a deep impression on Gandhiji's mind. Gandhiji was a mediocre student and was excessively shy and timid.

Gandhiji was truthful in his conduct right from the childhood. There is a very famous incident in this regard. A British school inspector once came to Gandhiji's school and set a spelling test. Gandhiji spelled all the words correctly except kettle. The class teacher noticed the mistake and gestured Gandhiji to copy the correct spelling from the boy sitting next to him. Gandhiji refused to take the hint and was later scolded for his "stupidity".

Gandhiji was married at the age of thirteen to Kasturbai. He was in high school at that time. Later on in his life, Gandhiji denounced the custom of child marriage and termed it as cruel. After matriculating from the high school, Gandhiji joined the Samaldas College in Bhavnagar. After the death of Gandhiji's father in 1885, a family suggested that if Gandhiji hoped to take his father's place in the state service he had better become a barrister which he could do in England in three years. Gandhi welcomed the idea but his mother was objected to the idea of going abroad. To win his mother's approval Gandhiji took a solemn vow not to touch wine, women and meat and remained true to it throughout his stay in England.

Gandhiji sailed for England on September 4, 1888. Initially he had difficulty in adjusting to English customs and weather but soon he overcame it. Gandhiji completed his Law degree in 1891 and returned to India. He decided to set up legal practice in Bombay but couldn't establish himself. Gandhiji returned to Rajkot but here also he could not make much headway. At this time Gandhiji received an offer from Dada Abdulla & Co. to proceed to South Africa on their behalf to instruct their counsel in a lawsuit. Gandhiji jumped at the idea and sailed for South Africa in April 1893.

It was in South Africa that Gandhiji's transformation from Mohandas to Mahatma took place. Gandhiji landed at Durban and soon he realized the oppressive atmosphere of racial snobbishness against Indians who were settled in South Africa in large numbers. After about a week's stay in Durban Gandhiji left for Pretoria, the capital of the Transvaal, in connection with a lawsuit. When the train reached Pietermaritzburg, the capital of Natal, at about 9 p.m. a white passenger who boarded the train objected to the presence of a "coloured" man in the compartment and Gandhiji was ordered by a railway official to shift to a third class. When he refused to do so, a constable pushed him out and his luggage was taken away by the railway authorities. It was winter and bitterly cold. This incident changed Gandhiji's life forever. He decided to fight for the rights of Indians. Gandhiji organised the Indian community in South Africa and asked them to forget all distinctions of religion and caste. He suggested the formation of an association to look after the Indian settlers and offered his free time and services.

During his stay in South Africa, Gandhiji's life underwent a change and he developed most of his political ideas. Gandhiji decided to dedicate himself completely to the service of humanity. He realized that absolute continence or brahmacharya was indispensable for the purpose as one could not live both after the flesh and the spirit. In 1906, Gandhiji took a vow of absolute continence. In the course of his struggle in South Africa, Gandhiji, developed the concepts of Ahimsa (non-violence) and Satyagraha (holding fast to truth or firmness in a righteous cause). Gandhiji's struggle bore fruit and in 1914 in an agreement between Gandhiji and South African Government, the main Indian demands were conceded.

Gandhiji returned to India in 1915 and on the advice of his political guru Gopal Krishna Gokhale, spent the first year touring throughout the country to know the real India. After an year of wandering, Gandhiji settled down on the bank of the river Sabarmati, on the outskirts of Ahmedabad, where he founded an ashram called Satyagraha Ashram. Gandhiji's first satyagraha in India was in Champaran, in Bihar, where he went in 1917 at the request of a poor peasants to inquire into the grievances of the much exploited peasants of that district, who were compelled by British indigo planters to grow indigo on 15 percent of their land and part with the whole crop for rent. Gandhiji's Satyagraha forced British government to set up a inquiry into the condition of tenant farmers. The report of the committee of which Gandhi was a member went in favour of the tenant farmers. The success of his first experiment in satyagraha in India greatly enhanced Gandhiji's reputation in the country.

In 1921, Gandhiji gave the call for Non-cooperation movement against the ills of British rule. Gandhiji's call roused the sleeping nation. Many Indians renounced their titles and honours, lawyers gave up their practice, and students left colleges and schools. Non-cooperation movement also brought women into the domain of freedom struggle for the first time. Non-cooperation movement severely jolted the British government. But the movement ended in an anti-climax in February 1922. An outbreak of mob violence in Chauri Chaura so shocked and pained Gandhi that he refused to continue the campaign and undertook a fast for five days to atone for a crime committed by others in a state of mob hysteria.

Gandhiji was sentenced to six years imprisonment but was released in 1924 on medical grounds. For the next five years Gandhi seemingly retired from active agitational politics and devoted himself to the propagation of what he regarded as the basic national needs, namely, Hindu-Muslim unity, removal of untouchability, equality of women, popularization of hand-spinning and the reconstruction of village economy.

On March 12, 1930 Gandhiji started the historic Dandi March to break the law which had deprived the poor man of his right to make his own salt. On April 6, 1930 Gandhiji broke the Salt law at the sea beach at Dandi. This simple act was immediately followed by a nation-wide defiance of the law. This movement galvanized the whole nation and came to be known as "Civil Disobedience Movement". Within a few weeks about a hundred thousand men and women were in jail, throwing mighty machinery of the British Government out of gear. This forced the then Viceroy Lord Irwin to call Gandhiji for talks. On March 5, 1931 Gandhi Irwin Pact was signed. Soon after signing the pact Gandhiji went to England to attend the First Round Table Conference. Soon after his return from England Gandhiji was arrested without trial.

After the outbreak of Second World War in 1939, Gandhiji again became active in the political arena. British Government wanted India's help in the war and Congress in return wanted a clear-cut promise of independence from British government. But British government dithered in its response and on August 8, 1942 Gandhiji gave the call for Quit India Movement. Soon the British Government arrested Gandhiji and other top leaders of Congress. Disorders broke out immediately all over India and many violent demonstrations took place. While Gandhiji was in jail his wife Kasturbai passed away. Gandhiji too had a severe attack of Malaria. In view of his deteriorating health he was released from the jail in May 1944.

Second World War ended in 1945 and Britain emerged victorious. In the general elections held in Britain in 1945, Labour Party came to power, and Atlee became the Prime Minister. He promised an early realization of self Government in India. A Cabinet Mission arrived from England to discuss with Indian leaders the future shape of a free and united India, but failed to bring the Congress and Muslims together. India attained independence but Jinnah's intransigence resulted in the partition of the country. Communal riots between Hindus and Muslims broke out in the country in the aftermath of partition. Tales of atrocities on Hindus in Pakistan provoked Hindus in India and they targeted Muslims. Gandhiji worked ceaselessly to promote unity between Hindus and Muslims. This angered some Hindu fundamentalists and on January 30, 1948 Gandhiji was shot dead by one such fundamentalist Nathu Ram Godse while he was going for his evening prayers. The last words on the lips of Gandhiji were Hey Ram.

Mahatma Gandhi Quote
Here are some famous quotes by Mahatma Gandhi. These quotes reveal his thinking and are a guiding light and source of inspiration to others.

Mahatma Gandhi Pictures
Here is a collection of pictures of Mahatma Gandhi. These images reveal different phases and facets of his life. These photos encompass his whole life journey from childhood to his martyrdom.