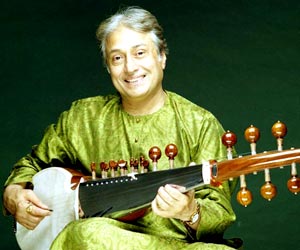 Ustad Amjad Ali Khan is a noted sarod player and one of the foremost classical musicians.

Ustad Amjad Ali Khan was born at Gwalior Madhya Pradesh in 1945. He belongs to the illustrious Bangash lineage rooted in the Senia Bangash School of music and is the sixth generation sarod player in his family. Amjad Ali Khan learnt Sarod under his father Haafiz Ali Khan's tutelage, who was a musician to the royal family of Gwalior.

Amjad Ali Khan gave his first solo recital at the age of 12 in 1958. He has developed a unique style of playing the sarod. The key innovations in his style are compositions based on vocal music, the technical ability to play highly complex phrases (ekhara taans) on the sarod spanning three octaves and the emphasis on simple and elegant compositions. Ustad Amjad Ali Khan has simplified the instrument by removing some strings (his sarod has only two jod and chikari strings and 11 tarab stings) and has also removed the resonant gourd (tumba) which is in use by other sarod schools.

Ustad Amjad Ali Khan is the recipient of many awards and honours. These include: Padmashree (1975), Sangeet Natak Academy Award (1989), the Tansen Award (1989) the Padma Bhushan (1991) and the International Music Forum Award, UNESCO in 1970.