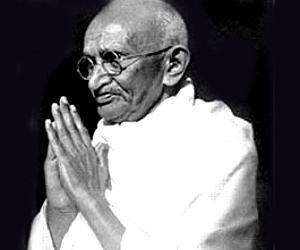 1906: Began Satyagraha campaign in South Africa to protest the requirement that Indians be fingerprinted and carry identification cards

1915: Returned to India from South Africa

1917: Initiated Champaran Satyagraha to alleviate the condition of indigo planters

1919: Instituted Satyagraha campaign in India to protest the Rowlatt Acts, which deprived all Indians of important civil liberties.

1922: Ended Non-Cooperation movement against British Raj after his followers were involved in a series of riots and disturbances that violated his policy of nonviolence

1930: Led Dandi March to collect salt in protest of the British salt tax.

1931: Signed a pact with Lord Irwin to suspend the Civil Disobedience Movement and went to London to attend Round Table Conference.

1932: Fasted to protest the treatment of people who belonged to no Hindu caste, the Harijans or Untouchables