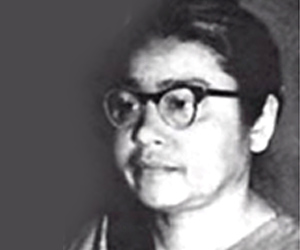 Sucheta Kriplani was a great freedom fighter of India. She was born as Sucheta Mazumdar in the year 1908. She was the first woman to be elected as the Chief Minister of a state in India. In this article, we will present you with the biography of Sucheta Kriplani, an important personality who has made an immense contribution in fighting for the freedom of India.

Early life
Sucheta Kriplani was born to a Bengali family in the Ambala city. Her father S.N. Majumdar was a nationalist of India. Sucheta took education from Indraprastha College and St.Stephen's College in Delhi. After completing her studies, she took the job of a lecturer in the Banaras Hindu University. In the year 1936, she tied her wedding knots with a socialist Acharya Kriplani and joined the Indian National Congress. Read on to know the complete life history of Sucheta Kriplani.

Freedom Movement and Independence
She came into the Indian historical scene during the Quit India Movement. Sucheta worked in close association with Mahatma Gandhi during the time of partition riots. She went along with him to Noakhali in 1946. She was one amongst the handful women who got elected to the Constituent Assembly. She became a part of the subcommittee that was handed over the task of laying down the charter for the constitution of India. On the 15th August, 1947, i.e. the Independence Day, she sang the national song Vande Mataram in the Independence Session of the Constituent Assembly.

Post Independence
During the post Independence period, she was instrumental in politics in U.P. She was elected to the Lok Sabha in the year 1952 and 1957. She also served as the Minister of State for Small Scale Industries. In the year 1962, she was elected to the U.P Assembly. In the year 1963, she became the first woman to hold a prestigious position of the Chief Minister of Uttar Pradesh. During her long tenure of work, one of her biggest achievements has been the effective handling of the 62 day long strike by the state employees. In the year 1971, she took retirement from the politics and went into seclusion. This prominent personality died in the year 1974.