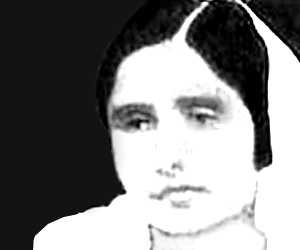 Born - 1911
Died - 1974
Achievements - Despite belonging from one of the most Mridula Sarabhai was an active Ghandian all her life. When she was merely 10 years old, she worked with the Vanar Sena of the Indian National Congress, carried messages and water for the Satyagrahis. Later, she was appointed a Gujrati delegate of the All India Congress Committee in 1924. Sarabhai also played a pertinent role in the organizational machinery of the Congress party by spearheading its women's wing.

A loyal follower of the great Mohandas Karamchand Gandhi during the Indian struggle for independence, Mridula Sarabhai was a well known freedom fighter as well a social activist of her time. She hailed from the famous Sarabhai family of Ahmedabad city in the Gujarat state. Born in the year 1911, Sarabhai's family then comprised among the most affluent ones in Ahmedabad city. Keep reading this biography to know more about Mridula Sarabhai.

Mridula Sarabhai was one of the eight children of Ambalal Sarabhai and Sarla Devi and used to be taught at home by a series of British and Indian tutors under the supervision of her family members. However, in contrary to her other siblings she enthusiastically responded to the call of Mahatma Gandhi's boycott of everything foreign. As such, she refused to outside India for her further studies and enrolled herself at the Gujarat Vidyapeeth in the year 1928.

This was just the beginning of the political life history of Mridula Sarabhai, who even dropped out of school to participate in the famous salt Satyagraha. Infact, it was from a very early age that Sarabhai came under the influence of Gandhiji. For instance, when she was merely 10 years old, she worked with the Vanar Sena of the Indian National Congress, carried messages and water for the Satyagrahis.

Further at the direction of Jawaharlal Nehru who was in the time to come become her lifelong friend and mentor, Mridula Sarabhai worked for the Youth Conference at Rajkot in 1927. Earlier, she was also appointed a Gujrati delegate of the All India Congress Committee in 1924. Sarabhai played a pertinent role in the organizational machinery of the Congress party by spearheading its women's wing.

During the year 1946, Pandit Nehru elected Mridula Sarabhai as a general secretary of the Indian National Congress and also a member of the Congress Working Committee. Sarabhai, however, resigned and followed Gandhiji to Noakhali when riots broke out. Her role in maintaining communal peace and harmony during the outbreak of violence at the time of India's partition was hugely applauded by leaders from India and Pakistan.