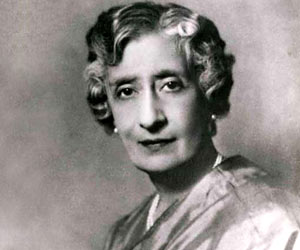 She was born on the February 2, 1889 in Lucknow to a princely family of Kapurthala, a part of undivided India. She was the first Indian woman to hold the position of cabinet minister. Well, we are talking about the well known freedom fighter Rajkumari Amrit Kaur. In this article, we will present you with the biography of Rajkumari Amrit Kaur, who was an eminent Gandhian and a great social reformer.

Amrit Kaur gave away all the worldly pleasures and focused her attention on serving the society. Throughout the freedom struggle of India, she worked in close association with other freedom fighters. After independence, she became the health minister of India. She was actively involved in activities undertaken for the welfare of society. To know the complete life history of Rajkumari Amritkaur, read on.

Early life
She came from a royal family background. She was the only daughter of her parents, Raja Harnam Singh and Rani Harnam Singh. She had seven brothers. She did her schooling from England at the school at Sherborne, Dorsetshire. She graduated from Oxford University. She was a fabulous tennis player. She even won a number of prizes for her excellent performance.

Coming from such a noble family, she could have led a very luxurious life. But, when she came to India, she left all her comforts and got involved in the social welfare activities. She was instrumental in the India's Independence Movement and played a vital role as a social reformer.

Raja Harnam Singh was a very pious and pure hearted person, who was frequently visited by prominent leaders of the Indian National Congress party like Gopal Krishna Gokhale. Amritkaur started developing interest in the freedom struggle and also became more aware about the activities that are undertaken by the freedom fighters. She was highly inspired by Mahatma Gandhi.

The ruthless killings that took place in the Jallianwala Bagh Massacre of 1919 motivated her to join the freedom struggle. Eventually, she worked together with Mahatma Gandhi. She went far away from materialist life and began leading the life of an ascetic. She came to live in Mahatma Gandhi's Ashram in the year 1934. She also raised her voice against inhuman acts like ill treatment of Harijans.

As a Gandhian
She became an active member of Indian National Congress. She was involved in almost all the activities and movements that were launched by Gandhiji for the wellbeing of people. She became one of the most dedicated disciples of Mahatma Gandhi. She sincerely followed the teachings and principles of Bapu. This explains the reason why she was also addressed as a Gandhian. During the Dandi March, she was along with Gandhiji. It is during this movement that, she was imprisoned by the British Raj authorities.

Post-independence
After the Independence of India, Rajkumari Amrit Kaur joined the Jawaharlal Nehru's first Cabinet. She was the first woman to hold a cabinet position. She was made the incharge of Ministry of Health. She was the only Christian in the cabinet of India. In the year 1950, she was elected for the post of President of the World Health Assembly.

She played a pivotal role in the task of conceptualizing and laying the foundation for the establishment of the All India Institute of Medical Sciences in New Delhi. For this, she secured aid from different countries like New Zealand, West Germany etc. She also provided assistance to a rehabilitation centre. She and her brother even donated their ancestral property that was made the holiday home for the staff of the institute.

She served as the Chairperson of the Indian Red Cross society for a long period of fourteen years. She made an immense contribution towards the development of the tribal groups of India. She held the position of health minister till 1957. Thereafter, she took retirement from the ministerial activities, but still remained a part of the Rajya Sabha. Till she was alive, she held the presidency position of AIMS and the Tuberculosis Association. She also served as the chairperson of St. John's Ambulance Corps. This great soul departed for heaven on the 2nd October in the year 1964.