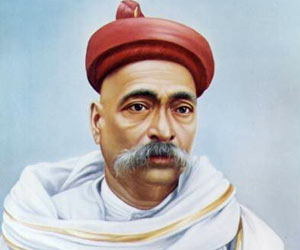 Born: July 23, 1856
Died: August 1, 1920
Achievements: Considered as Father of Indian National Movement; Founded “Deccan Education Society” to impart quality education to India's youth; was a member of the Municipal Council of Pune, Bombay Legislature, and an elected 'Fellow' of the Bombay University; formed Home Rule League in 1916 to attain the goal of Swaraj.

Bal Gangadhar Tilak was born on July 23, 1856 in Ratnagiri, Maharashtra. He was a Chitpavan Brahmin by caste. His father Gangadhar Ramachandra Tilak was a Sanskrit scholar and a famous teacher. Tilak was a brilliant student and he was very good in mathematics. Since childhood Tilak had an intolerant attitude towards injustice and he was truthful and straightforward in nature. He was among India's first generation of youth to receive a modern, college education.

When Tilak was ten his father was transferred to Pune from Ratnagiri. This brought sea change in Tilak’s life. He joined the Anglo-Vernacular School in Pune and got education from some of the well known teachers. Soon after coming to Pune Tilak lost his mother and by the time he was sixteen he lost his father too. While Tilak was studying in Matriculation he was married to a 10-year-old girl called Satyabhama. After passing the Matriculation Examination Tilak joined the Deccan College. In 1877, Bal Gangadhar Tilak got his B.A. degree with a first class in mathematics. He continued his studies and got the LL.B. degree too.

After graduation, Tilak began teaching mathematics in a private school in Pune and later became a journalist. He became a strong critic of the Western education system, feeling it demeaning to Indian students and disrespectful to India's heritage. He came to the conclusion that good citizens can be moulded only through good education. He believed that every Indian had to be taught about Indian culture and national ideals. Along with his classmate Agarkar and great social reformer Vishnushastry Chiplunkar, Bal Gangadhar Tilak founded “Deccan Education Society” to impart quality education to India's youth.

The very next year after the Deccan Education Society was founded, Tilak started two weeklies, 'Kesari' and 'Mahratta'. 'Kesari' was Marathi weekly while 'Mahratta' was English weekly. Soon both the newspapers became very popular. In his newspapers, Tilak highlighted the plight of Indians. He gave a vivid picture of the people's sufferings and of actual happenings. Tilak called upon every Indian to fight for his right. Bal Gangadhar Tilak used fiery language to arouse the sleeping Indians.

Bal Gangadhar Tilak joined the Indian National Congress in 1890. He was a member of the Municipal Council of Pune, Bombay Legislature, and an elected 'Fellow' of the Bombay University. Tilak was a great social reformer. He issued a call for the banning of child marriage and welcomed widow remarriage. Through the celebrations of Ganapati Festival and the birthday of the Shivaji he organized people.

In 1897, Bal Gangadhar Tilak was charged with writing articles instigating people to rise against the government and to break the laws and disturb the peace. He was sentenced to rigorous imprisonment for one and a half year. Tilak was released in 1898. After his release, Tilak launched Swadeshi Movement. Through newspapers and lectures, Tilak spread the message to each and every village in Maharashtra. A big 'Swadeshi Market' was opened in front of Tilak's house. Meanwhile, Congress was split into two camps-Moderates and Extremists. Extremists led by Bal Gangadhar Tilak opposed the moderate faction led by Gopal Krishna. Extremists were in the favour of self rule while the moderates thought that time is not yet ripe for such an eventuality. This rift finally led to a split in the Congress.

Tilak was arrested on the charges of sedition in 1906. After the trial, Tilak was sentenced to six years of imprisonment in Mandalay (Burma). Tilak spent his time in prison by reading and writing. He wrote the book 'Gita-Rahasya' while he was in prison. Tilak was released on June 8, 1914. After his release, Bal Gangadhar Tilak tried to bring the two factions of Congress together. But his efforts did not bear much fruit. In 1916, Tilak decided to build a separate organization called the 'Home Rule League'. Its goal was swaraj. Tilak went from village to village, and explained the aim of his league to the farmers and won their hearts. He traveled constantly in order to organize the people. While fighting for people’s cause Bal Gangadhar Tilak died on August 1, 1920.