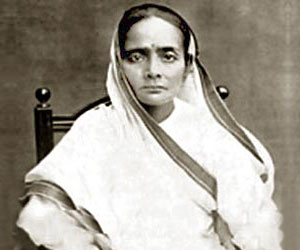 Kasturba Gandhi was born to a prosperous businessman Gokuladas Makharji of Porbandar on April 11, 1869. She got married to Mohandas Gandhi, when she was just thirteen years old. At the time of her marriage, Kasturba was an absolute illiterate. Gandhi taught her how to read and write. When her husband left for London for pursuing further studies, she remained in India for upbringing their newly born son Harilal. The couple had three more sons. Well, in this article, we will present you with the biography of Kasturba Gandhi.

In the year 1906, Mohandas Gandhi made up his mind to practice Brahmacharya. Like a good wife, Kasturba always stood by the side of her husband, even if she didn't approve of some of his ideas. Kasturba was very religious minded. She broke the barriers that created caste distinction and lived in ashrams. She always supported her husband in the political protests. She went along with her husband to South Africa in the year 1897. To know the complete life history of Kasturba Gandhi, read on.

From the period between 1904 and 1914, she was actively involved in the Phoenix Settlement near Durban. In the year 1913, she raised her voice against the inhuman working conditions of Indians in South Africa. Infact, she was imprisoned for three months and that too in the jail, where the prisoners were made to do hard labor. In 1915, she accompanied her husband and supported the Indigo planters. There, she taught women and children about basic concepts like personal hygiene, discipline etc.

Kasturba Gandhi suffered from the problem of chronic Bronchitis. To top it, the stress level caused during the Quit India Movement's arrests aggravated her illness. Her health began to decline. The situation got worse, when she got victimized by pneumonia. Her husband disagreed with her idea to go in for penicillin. On February 22, 1944, she had a major heart attack and she died.