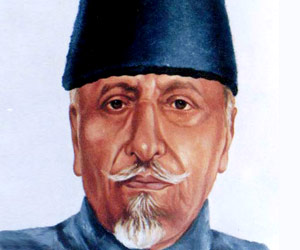 Maulana Abul Kalam Azad was born on November 11, 1888 in Mecca. His forefather's came from Herat (a city in Afghanistan) in Babar's days. Azad was a descendent of a lineage of learned Muslim scholars, or maulanas. His mother was an Arab and the daughter of Sheikh Mohammad Zaher Watri and his father, Maulana Khairuddin, was a Bengali Muslim of Afghan origins. Khairuddin left India during the Sepoy Mutiny and proceeded to Mecca and settled there. He came back to Calcutta with his family in 1890.

Because of his orthodox family background Azad had to pursue traditional Islamic education. He was taught at home, first by his father and later by appointed teachers who were eminent in their respective fields. Azad learned Arabic and Persian first and then philosophy, geometry, mathematics and algebra. He also learnt English, world history, and politics through self study.

Azad was trained and educated to become a clergyman. He wrote many works, reinterpreting the Holy Quran. His erudition led him to repudiate Taqliq or the tradition of conformity and accept the principle of Tajdid or innovation. He developed interest in the pan-Islamic doctrines of Jamaluddin Afghani and the Aligarh thought of Sir Syed Ahmed Khan. Imbued with the pan-Islamic spirit, he visited Afghanistan, Iraq, Egypt, Syria and Turkey. In Iraq he met the exiled revolutionaries who were fighting to establish a constitutional government in Iran. In Egypt he met Shaikh Muhammad Abduh and Saeed Pasha and other revolutionary activists of the Arab world. He had a first hand knowledge of the ideals and spirit of the Young Turks in Constantinople. All these contacts metamorphosed him into a nationalist revolutionary.

On his return from abroad, Azad met two leading revolutionaries of Bengal- Aurobindo Ghosh and Sri Shyam Shundar Chakravarty,-and joined the revolutionary movement against British rule. Azad found that the revolutionary activities were restricted to Bengal and Bihar. Within two years, Maulana Abul Kalam Azad, helped setup secret revolutionary centers all over north India and Bombay. During that time most of his revolutionaries were anti-Muslim because they felt that the British Government was using the Muslim community against India's freedom struggle. Maulana Abul Kalam Azad tried to convince his colleagues to shed their hostility towards Muslims.

In 1912, Maulana Abul Kalam Azad started a weekly journal in Urdu called Al Hilal to increase the revolutionary recruits amongst the Muslims. Al-Hilal played an important role in forging Hindu-Muslim unity after the bad blood created between the two communities in the aftermath of Morley-Minto reforms. Al Hilal became a revolutionary mouthpiece ventilating extremist views. The government regarded Al Hilal as propogator of secessionist views and banned it in 1914. Maulana Azad then started another weekly called Al-Balagh with the same mission of propagating Indian nationalism and revolutionary ideas based on Hindu-Muslim unity. In 1916, the government banned this paper too and expelled Maulana Abul Kalam Azad from Calcutta and interned him at Ranchi from where he was released after the First World War in 1920.

After his release, Azad roused the Muslim community through the Khilafat Movement. The aim of the movement was to re-instate the Khalifa as the head of British captured Turkey. Maulana Azad supported Non-Cooperation Movement started by Gandhiji and entered Indian National Congress in 1920. He was elected as the president of the special session of the Congress in Delhi (1923). Maulana Azad was again arrested in 1930 for violation of the salt laws as part of Gandhiji's Salt Satyagraha. He was put in Meerut jail for a year and a half. Maulana Azad became the president of Congress in 1940 (Ramgarh) and remained in the post till 1946. He was a staunch opponent of partition and supported a confederation of autonomous provinces with their own constitutions but common defence and economy. Partition hurt him greatly and shattered his dream of an unified nation where Hindus and Muslims can co-exist and prosper together.

Maulana Abul Kalam Azad served as the Minister of Education in Pandit Jawaharlal Nehru's cabinet from 1947 to 1958. He died of a stroke on February 22, 1958.