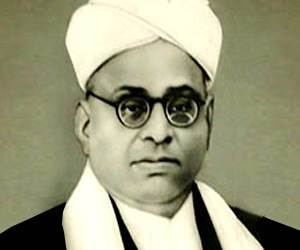 Born - 1874
Died - 1941
Achievements - S. Srinivasa Iyengar was a prominent Indian lawyer, freedom fighter and political leader of his time. In the struggle for India's independence from the British, he gave unrivaled spearheading to the Congress in Madras for almost a decade.

S. Srinivasa Iyengar was a prominent Indian lawyer, freedom fighter and political leader of his time. Born in the year 1874 at the former Madras Presidency, Srinivasa was the son of an orthodox Vaishnava Brahmin, who was the landowner of Ramanathapuram district. After graduating from college, he acquired a degree in law and worked as an advocate for sometime. It was when the non-cooperation movement incepted as part of the struggle for independence from the British that Iyengar resigned from the office of the Advocate General and joined the Indian National Congress.

Read on to get more information about S. Srinivasa Iyengar, who went on to supervise the Madras Provincial Conference at Tirunelveli in the year 1920. He did this after giving up his practice at the bar, relinquishing the membership of the Legislative Council and instead taking active interest in the affairs of the Indian National Congress. Infact, S. Srinivasa Iyengar was present during all sessions of the Congress held from Ahmedabad to Lahore in the year 1921. For the next 10 years, he gave unrivaled spearheading to the Congress in Madras.

Here's more about the life history of S. Srinivasa, who himself led the Congress party to win in Madras in the year 1926 and got appointed from here to the Central Assembly. For a short duration, S. Srinivasa Iyengar also played the role of a leader in the absence of Motilal Nehru from India. The same year, Iyengar also presided over the Guwahati session of the Congress. Iyengar worked his level best to delve out a solution that would uphold Hindu-Muslim unity. And for this, Iyengar tried his mighty best to bring about provisional political agreement between the political leaders of the two communities.

S. Srinivasa Iyengar brought out the Swaraj Constitution in the year 1927 outlining a federal scheme of government for the future India. He returned briefly into the political sphere in 1939 following the beginning of the World War II to decide if it was okay to support the British at this juncture so that they might grant India its freedom later or oppose the entry of Indian army into the war. However, Iyengar passed away suddenly on 19 May 1941 at his residence in Madras city.