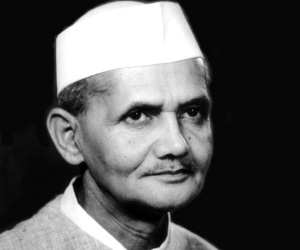 Born: October 2, 1904
Died: January 10, 1966
Achievements: Played a leading role in Indian freedom struggle; became Parliamentary Secretary of Pandit Govind Vallabh Pant, the then chief minister of Uttar Pradesh; became the Minister of Police and Transport in Pant's Cabinet; appointed as the Railways and Transport Minister in the Central Cabinet; also held the portfolios of Transport & Communications, Commerce and Industry, and Home Ministry in the Central cabinet; became Prime Minister of India in 1964; led India to victory over Pakistan in 1965 war.

Lal Bahadur Shastri was the second Prime Minister of independent India. Though diminutive in physical stature he was a man of great courage and will. He successfully led country during the 1965 war with Pakistan. To mobilize the support of country during the war he coined the slogan of "Jai Jawan Jai Kisan". Lal Bahadur Sastri also played a key role in India's freedom struggle. He led his life with great simplicity and honesty and was a great source of inspiration for all the countrymen.

Lal Bahadur stayed at his grandfather's house till he was ten. By that time he had passed the sixth standard examination. He went to Varanasi for higher education. In 1921 when Mahatma Gandhi launched the non-cooperation movement against British Government, Lal Bahadur Shastri, was only seventeen years old. When Mahatma Gandhi gave a call to the youth to come out of Government schools and colleges, offices and courts and to sacrifice everything for the sake of freedom, Lal Bahadur came out of his school. Though his mother and relatives advised him not to do so, he was firm in his decision. Lal Bahadur was arrested during the Non-cooperation movement but as he was too young he was let off.

After his release Lal Bahadur joined Kashi Vidya Peeth and for four years he studied philosophy. In 1926, Lal Bahadur earned the degree of "Shastri" After leaving Kashi Vidya Peeth, Lal Bahadur Shastri joined "The Servants of the People Society", which Lala Lajpat Rai had started in 1921. The aim of the Society was to train youths that were prepared to dedicate their lives in the service of the country. In 1927, Lal Bahadur Shastri married Lalitha Devi. The marriage ceremony was very simple and Shastriji took only a charkha (spinning wheel) and few yards of Khadi in dowry.

In 1930, Gandhiji gave the call for Civil Disobedience Movement. Lal Bahadur Shastri joined the movement and encouraged people not to pay land revenue and taxes to the government. He was arrested and put in jail for two and a half years. In jail Shastriji became familiar with the works of western philosophers, revolutionaries and social reformers. Lal Bahadur Shastri had great self respect. Once when he was in prison, one of his daughters fell seriously ill. The officers agreed to release him out for a short time but on condition that he should agree in writing not to take part in the freedom 'movement during this period. Lal Bahadur did not wish to participate in the freedom movement during his temporary release from prison; but he said that he would not give it in writing. He thought that it was against his self-respect to give it in writing.

In the next general elections when Congress returned to power, Lal Bahadur Shastri became the Minister for Transport and Communications and later the Minister for Commerce and Industry. He became the Home Minister in 1961, after the death of Govind Vallabh Pant. In the 1962 India-China war Shastriji played a key role in maintaining internal security of the country.

After the death of Jawaharlal Nehru in 1964, Lal Bahadur Shastri was unanimously elected as the Prime Minister of India. It was a difficult time and the country was facing huge challenges. There was food shortage in the country and on the security front Pakistan was creating problems. In 1965, Pakistan tried to take advantage of India's vulnerability and attacked India. Mild-mannered Lal Bahadur Shastri rose to the occasion and led the country ably. To enthuse soldiers and farmers he coined the slogan of "Jai Jawan, Jai Kisan". Pakistan lost the war and Shastriji's leadership was praised all over the world.

In January 1966, to broker peace between India and Pakistan, Russia mediated a meeting between Lal Bahadur Shastri and Ayub Khan in Tashkent, Russia. India and Pakistan signed the joint declaration under Russian mediation. Under the treaty India agreed to return to Pakistan all the territories occupied by it during the war. The joint declaration was signed on January 10, 1966 and Lal Bahadur Shastri died of heart attack on the same night.