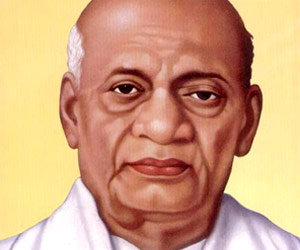 Sardar Patel was popularly known as Iron Man of India. His full name was Vallabhbhai Patel. He played a leading role in the Indian freedom struggle and became the first Deputy Prime Minister and Home Minister of India. He is credited with achieving political integration of India.

Vallabhbhai Patel was born on October 31, 1875 in Nadiad, a small village in Gujarat. His father Jhaverbhai was a farmer and mother Laad Bai was a simple lady. Sardar Vallabhai's early education took place in Karamsad. Then he joined a school in Petlad. After two years he joined a high school in a town called Nadiad. He passed his high school examination in 1896. Sardar Vallabhbhai Patel was a brilliant student throughout his schooling.

Vallabhbhai wanted to become a barrister. To realize this ambition he had to go to England. But he did not have the financial means to even join a college India. In those days a candidate could study in private and sit for an examination in Law. Sardar Vallabh Bhai Patel borrowed books from a lawyer of his acquaintance and studied at home. Occasionally he attended courts of law and listened attentively to the arguments of lawyer. Vallabhbhai passed the Law examination with flying colours.

Sardar Vallabhbhai Patel started his Law practice in Godhra. Soon his practice flourished. He got married to Jhaberaba. In 1904, he got a baby daughter Maniben, and in 1905 his son Dahyabhai was born. Vallabhbhai sent his elder brother Vitthalbhai, who himself was a lawyer, to England for higher studies in Law. Patel was only thirty-three years old when his wife died. He did not wish to marry again. After his brother's return, Vallabhbhai went to England. He studied with single-minded devotion and stood first in the Barrister-at-Law Examination.

Sardar Patel returned to India in 1913 and started his practice in Ahmedabad. Soon he became popular. At the urging of his friends, Patel contested and won elections to become the sanitation commissioner of Ahmedabad in 1917. Sardar Patel was deeply impressed by Gandhiji's success in Champaran Satyagraha. In 1918, there was a drought in the Kheda division of Gujarat. Peasants asked for relief from the high rate of taxes but the British government refused. Gandhiji took up peasants cause but could not devote his full time in Kheda. He was looking for someone who could lead the struggle in his absence. At this point Sardar Patel volunteered to come forward and lead the struggle. He gave up his lucrative legal practice and entered public life.

Vallabhbhai successfully led peasants revolt in Kheda and the revolt ended in 1919 when the British government agreed to suspend collection of revenue and roll back the rates. Kheda Satyagraha turned Vallabhbhai Patel into a national hero. Vallabhbhai supported Gandhi's Non-Cooperation Movement, and as president of the Gujarat Congress, helped in organizing bonfires of British goods in Ahmedabad. He gave up his English clothes and started wearing Khadi. Sardar Vallabh Bhai Patel was elected Ahmedabad's municipal president in 1922, 1924 and 1927. During his terms, Ahmedabad was extended a major supply of electricity and underwent major education reforms. Drainage and sanitation systems were extended over all the city.

In 1928, Bardoli Taluka in Gujarat suffered from floods and famine. In this hour of distress the British government raised the revenue taxes by thirty percent. Sardar Patel took up cudgels on behalf of the farmers and appealed to the Governor to reduce the taxes. The Governor refused and the government even announced the date of the collection of the taxes. Sardar Patel organized the farmers and told them not to pay even a single pie of tax. The government tried to repress the revolt but ultimately bowed before Vallabhbhai Patel. It was during the struggle and after the victory in Bardoli that caused intense excitement across India, that Patel was increasingly addressed by his colleagues and followers as Sardar.

Disobedience Movement in 1930. After the signing of Gandhi-Irwin pact in 1931, Sardar Patel was released and he was elected Congress president for its 1931 session in Karachi. Upon the failure of the Round Table Conference in London, Gandhiji and Sardar Patel were arrested in January 1932 and imprisoned in the Yeravada Central Jail. During this term of imprisonment, Sardar Patel and Mahatma Gandhi grew close to one another, and the two developed a close bond of affection, trust, and frankness without reserve. Sardar Patel was finally released in July 1934.

In August 1942, the Congress launched the Quit India Movement. The government jailed all the important leaders of the Congress, including Vallabhai Patel. All the leaders were released after three years. After achieving independence on 15th of August 1947, Pandit Jawaharlal Nehru became the first Prime Minister of independent India and Sardar Patel became the Deputy Prime Minister. He was in charge of Home Affairs, Information and Broadcasting and the Ministry of States.

There were 565 princely states in India at that time. Some of the Maharajas and Nawabs who ruled over these were sensible and patriotic. But most of them were drunk with wealth and power. They were dreaming of becoming independent rulers once the British quit India. They argued that the government of free India should treat them as equals. Some of them went to the extent of planning to send their representatives to the United Nations Organization. Patel invoked the patriotism of India's monarchs, asking them to join in the freedom of their nation and act as responsible rulers who cared about the future of their people. He persuaded the princes of 565 states of the impossibility of independence from the Indian republic, especially in the presence of growing opposition from their subjects. With great wisdom and political foresight, he consolidated the small kingdoms. The public was with him. He tackled the Nizam of Hyderabad and the Nawab of Junagarh who initially did not want to join India. Sardar Patel's untiring efforts towards the unity of the country brought success. He united a scattered nation without much bloodshed. Due to the achievement of this massive task, Sardar Patel got the title of 'Iron Man'. Sardar Patel died of cardiac arrest on December 15, 1950. For his services to the nation Sardar Patel was conferred with Bharat Ratna in 1991.