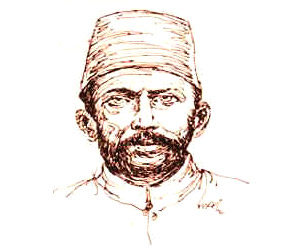 Born - 1863
Died - 1927
Achievements - A prominent leader of India's freedom struggle, it was Ajmal Khan who founded the prestigious Jamia Milia Islamia University at Delhi. He is also the sole person who has had the honor to be elected the President of the Indian National Congress, the Muslim League and the All India Khilafat Committee.

Ajmal khan was a prominent freedom fighter, respected physician and academician of India. It was he who founded the prestigious Jamia Milia Islamia University at Delhi. Ajmal Khan is also the sole person who has had the honor to be elected the President of the Indian National Congress, the Muslim League and the All India Khilafat Committee. He was born in the year 1863 at Delhi and belonged from an illustrious family of physicians said to be the lineage in Emperor Babur's army.

Keep reading to know more about the biography of Ajmal Khan. Khan was a religious man who read the holy Quran and other books based on the traditional Islamic knowledge. At the same time, he also studied the medicine at home under the guidance of their family members. After beginning his practice, Khan was elected as the main physician to the Nawab of Rampur from the time period 1892 to 1902. Here, he was introduced to Syed Ahmed Khan who chose him as the trustee of the Aligarh College, now called the Aligarh Muslim University.

The life history of Ajmal Khan changed its course from medicine towards politics after he started writing for an Urdu weekly 'Akmal-ul-Akhbar' that was launched by his family in 1865-70. Khan was also heading the Muslim team, who met the Viceroy of India in Shimla in the year 1906 to give him a memorandum made by them. The following year, he was present at Dhaka when the All India Muslim League was formulated. Dr Ajmal Khan also supported the British during the First World War and asked the Indian to do the same.

At a time when many Muslim leaders were arrested, Dr Ajmal Khan approached Mahatma Gandhi for help. As such, Gandhiji united with him and other Muslim leaders like Maulana Azad, Maulana Mohammad Ali and Maulana Shaukat Ali in the famous Khilafat movement. Ajmal Khan resigned from the Aligarh Muslim University when the authorities refused to accept the non-cooperation movement waged by Gandhiji and the Congress against the British government. He was elected the president of the Indian National Congress in the year 1921.