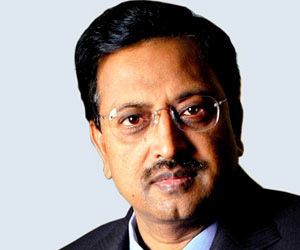 Born: September 16, 1954
Achievement: Founder and Chairman of Satyam Computer Services Ltd; Chosen as Ernst & Young Entrepreneur of the Year for Services in 1999

Ramalinga Raju is one of the pioneers of the Information Technology industry in India. He is the founder and Chairman of Satyam Computer Services Ltd.

Ramalinga Raju was born on September 16, 1954 in a family of farmers. He did his B. Com from Andhra Loyola College at Vijayawada and subsequently did his MBA from Ohio University, USA. Ramalinga Raju had a stint at Harvard too. He attended the Owner / President course at Harvard.

After returning to India in 1977, Ramalinga Raju moved away from the traditional agriculture business and set up a spinning and weaving mill named Sri Satyam. . Thereafter he shifted to the real estate business and started a construction company called Satyam Constructions. In 1987, Ramalinga Raju founded Satyam Computer Services along with one of his brothers-in-law, DVS Raju. The company went public in 1992. With the launch of Satyam Infoway (Sify) Satyam became one of the first to enter Indian internet service market. Today, Satyam has a global presence and serves 44 Fortune 500 and over 390 multinational corporations.

The ever-soaring share prices of Satyam witnessed a sharp decline in December 2008, following a failed acquisition attempt involving Maytas, a company owned by Raju's family. In January 2009, Raju resigned as the Chairman of Satyam after he admitted to major financial wrong-doings. In Januray 2009, Raju confessed of his involvement in inflating the profits of the company for the past couple of years. The 7,800-crore fraud started with an initial cover-up for a poor quarterly performance and assumed massive proportion, with time.