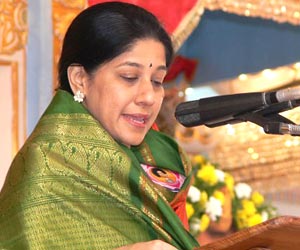 Economic Times Businesswoman of the year 2006, she is a well known entrepreneur of India. She has always strived hard to reach for skies, but has deeply rooted her foot into the ground. She is a strong headed woman, who is leading the activities of a Company that is involved in macho business such as tractor manufacturing. She has been able to rise and stand out above all others and make a name for herself in the competitive business world of today. Well, we are talking about Mallika Srinivasan, director of the Rs 2500 crore Amalgamations Group Tafe. Mallika Srinivasan is one of the most successful women CEOs in India. In this article, we will present you with the biography of Mallika Srinivasan, so read on…

Born on November 19, 1959 as the eldest daughter of industrialist A Sivasailam, she is the pride of her parents. She was always brilliant in academics. She did her in MA (econometrics) from Madras University. Thereafter, she went abroad to pursue further studies. She did her MBA from the Wharton School of the University of Pennsylvania. Married to Venu Srinivasan, the CMD of TVS Motor, she is living happily with their two children.

In the year 1986, she planned to join the family business. She was made the General Manager of Tafe (Tractors and Farm Equipment) Company. When she took over the responsibility of furthering the economic wealth and business, the turnover of the Company was Rs 85 cr. Under the expert guidance of her father and the whole hearted support of the team, she brought about a major transformation. She converted Tafe into a hi technology-oriented company, thereby becoming the initial choice of the farmers. There was a period, when the Company had to face a tough time, however; even then, the Company invested a huge amount of over Rs 70 crore in the designing and development of product.

At present, the Company is earning a business over Rs 1,200 cr. It has been a long journey for the Company, which has witnessed many ups and downs. But, it was the strong determination of this courageous woman that slowly and steadily made the firm climb the ladders of success. Today, the Company has not only found a niche for itself as the leading tractor manufacturer, but also expanded its area of operations. It has also entered into others businesses like engineering plastics, panel instruments, automotive batteries gears, hydraulic pumps, and farm implements.

The company has had a long alliance with Massey Ferguson, which is now a part of Agco. The company is looking forward to exporting fully constructed tractors to Agco. Presently, Agro has a stake of 24% in the company and the rest lies with Simpson & Co. Presently, Mallika Srinivasan is serving as the president of premier industrial bodies like Tractor Manufacturers Association and the Madras Management Association. She is the first lady to have assumed the role of a president of the Madras Chamber of Commerce and Industry. She is also a prominent member of the governing board of the Indian School of Business, Hyderabad.