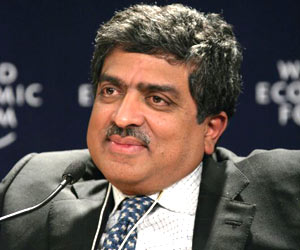 Achievement: CEO and Managing Director of the Infosys; Conferred the Padma Bhushan in 2006.

Nandan Nilekani is the CEO and managing director of the Infosys. Along with Narayan Murthy, he was one of the co-founders of Infosys. He has served as a director on the company's board since its inception in 1981. Before assuming the post of CEO in March 2002, Nandan Nilekani held the post of Managing Director, President and Chief Operating Officer.

In 1980s and 90s Nandan Nilekani and his team worked hard to build Infosys. Today Infosys' success story has become a legend in India's corporate history. Today, Infosys has an employee strength of 58,000, annual revenue of $2 billion and $21 billion capitalization.

Nandan Nilekani is recipient of several honors and awards. In January 2006, Nandan became one of the youngest entrepreneurs to join 20 global leaders on the prestigious World Economic Forum (WEF) Foundation Board. He figures among one of the 100 most influential people in the world by Time Magazine, 2006. In 2005 he was awarded the prestigious Joseph Schumpeter prize for innovative services in field of economy, economic sciences and politics. In 2006, Nandan Nilekani was conferred the Padma Bhushan, one of the highest civilian honors of India.