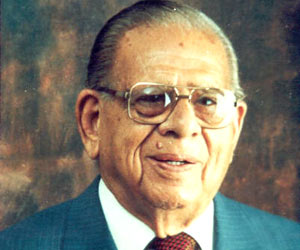 Born: August 15, 1898
Achievement: Founder of the Oberoi Group of Hotels; Honored with Padma Bhushan in 2001.

M.S. Oberoi can be aptly termed as the father of the Indian hotel industry. Rai Bahadur Mohan Singh Oberoi was among the first to recognize the potential of the tourism industry, its ability to contribute to India's economic growth and generate direct and indirect employment. He worked tirelessly to put Indian hotel industry on global tourism map.

M.S. Oberoi was born on August 15, 1898, in the erstwhile undivided Punjab, now in Pakistan. He did his early schooling in Rawalpindi and completed his graduation from Lahore. In 1922, to escape the epidemic of Plague, he came to Shimla, and got a job of front desk clerk, at The Cecil Hotel at a salary of Rs 50 per month.

M.S. Oberoi was a quick learner and shouldered many additional responsibilities along with the job of desk clerk. M. S. Oberoi's diligence prompted Mr. Clarke to request Mohan Singh Oberoi to assist him when he acquired Clarkes Hotel. At the Clarkes Hotel, M.S. Oberoi gained first hand experience in all aspects of hotel operations.

In 1934, M.S. Oberoi acquired The Clarkes Hotel from his mentor, by mortgaging his wife's jewelry and all his assets. In 1938, he signed a lease to takeover operations of the five hundred room Grand Hotel in Calcutta, which was up for sale following a cholera epidemic.

In 1943, Rai Bahadur Mohan Singh Oberoi, acquired the controlling interest in the Associated Hotels of India (AHI) which owned the Cecil, and Corstophans in Shimla, the Maidens and the Imperial in Delhi, and a hotel each in Lahore, Murree, Rawalpindi and Peshawar. He thus became the first Indian to run the largest and finest hotel chain.

In 1959, The Oberoi Group became the first group to start flight catering operations in India. In 1965, M.S. Oberoi opened the first modern, five star international hotel in the country, The Oberoi Intercontinental, in Delhi. In 1966 he established the prestigious Oberoi School of Hotel Management, recognized by the International Hotel Association in Paris. In 1973, The Oberoi Group opened the 35 storey Oberoi Sheraton in Mumbai. Rai Bahadur M.S. Oberoi was the first to employ women in the hospitality sector.

M.S. Oberoi was recipient of many awards and honours. In 1943, he was conferred the title of Rai Bahadur by the British Government. Other honors include admission to the Hall of Fame by the American Society of Travel Agents (ASTA); Man of The World by the International Hotel Association (IHA) New York; named by Newsweek as one of the "Elite Winners of 1978" and the PHDCCI Millennium award in 2000. M.S. Oberoi was honored with Padma Bhushan in 2001.