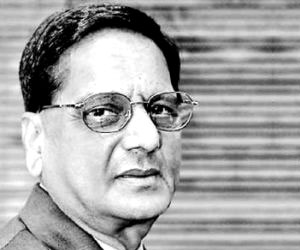 Achievements: Founder-chairman of Dr Reddy's Group of Companies; Awarded with Padma Shri in 2001.

Dr. K. Anji Reddy is a pioneer in the pharmaceutical research in India and is founder-chairman of Dr Reddy's Group of Companies.

Dr Kallam Anji Reddy did his B.Sc in Pharmaceuticals and Fine chemicals from Bombay University and subsequently completed his PhD in Chemical Engineering from National Chemical Laboratory, Pune, in 1969. Dr. K. Anji Reddy served in PSU Indian Drugs and Pharmaceuticals Limited from 1969 to 1975. Dr. Reddy was the founder-Managing Director of Uniloids Ltd from 1976 to 1980 and Standard Organics Limited from 1980 to 1984.

Presently, Dr. Reddy is a serving member of the Prime Minister's Council on Trade & Industry, Government of India, and has been nominated to the Board of National Institute of Pharmaceutical Education and Research (NIPER).

Dr. K. Anji Reddy is also a philanthropist. He is the founder-Chairman of Dr. Reddy's Foundation for Human & Social Development, a social arm of Dr. Reddy's, which acts as a catalyst of change to achieve sustainable development.

Dr. K. Anji Reddy has received many awards and honors. These include Sir PC Ray award (conferred twice, in 1984 and 1992); Federation of Asian Pharmaceutical Associations (FAPA)'s FAPA-Ishidate Award for Pharmaceutical Research in 1998; leading business magazine Business India voted him Businessman of the Year in 2001; CHEMTECH Foundation bestowed on him the Achiever of the Year award in the year 2000 and the 'Hall of Fame' award in 2005, for his Entrepreneurship, Leadership and thrust on Innovation; and in 2001, he was awarded the Padma Shri by the Government of India.