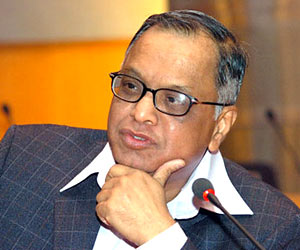 Born: August 20, 1946
Achievement: One of the founders of Infosys Technologies Limited; Chosen as the World Entrepreneur of the Year - 2003 by Ernst and Young

Narayana Murthy is the Non-Executive Chairman and Chief Mentor of Infosys Technologies Limited. He is a living legend and an epitome of the fact that honesty, transparency, and moral integrity are not at variance with business acumen. He set new standards in corporate governance and morality when he stepped down as the Executive Chairman of Infosys at the age of 60.

Born on August 20, 1946, N.R. Narayana Murthy is a B.E. Electrical from University of Mysore (1967) and M.Tech from IIT Kanpur (1969). Narayan Murthy began his career with Patni Computer Systems in Pune. In 1981, Narayana Murthy founded Infosys with six other software professionals. In 1987, Infosys opened its first international office in U.S.A.

With the liberalization of Indian economy in 1990s, Infosys grew rapidly. In 1993, the company came up with its IPO. In 1995, Infosys set up development centers across cities in India and in 1996, it set up its first office in Europe in Milton Keynes, UK. In 1999, Infosys became the first Indian company to be listed on NASDAQ. Today (in 2006), Infosys has a turnover of more than $ 2billion and has employee strength of over 50,000. In 2002, Infosys was ranked No. 1 in the "Best Employers in India 2002" survey conducted by Hewitt and in the Business World's survey of "India's Most Respected Company." Conducted in the same year.

Along with the growth of Infosys, Narayana Moorthy too has grown in stature. He has received many honors and awards. In June 2000, Asiaweek magazine featured him in a list of Asia's 50 Most Powerful People. In 2001, Narayana Murthy was named by TIME/CNN as one of the 25 most influential global executives. He was the first recipient of the Indo-French Forum Medal (2003) and was voted the World Entrepreneur of the Year - 2003 by Ernst and Young. The Economist ranked Narayana Murthy eighth on the list of the 15 most admired global leaders (2005) and Narayan Murthy also topped the Economic Times Corporate Dossier list of India's most powerful CEOs for two consecutive years - 2004 and 2005.