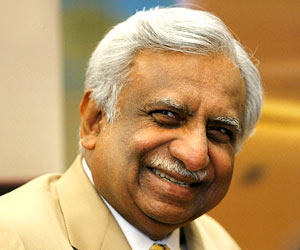 Achievement: Founder Chairman of Jet Airways; Recipient of the first BM Munjal Award for Excellence in Learning & Development in the Private Sector category in 2006.

Naresh Goyal completed his graduation in Commerce in 1967 and joined the travel business with the GSA for Lebanese International Airlines. From 1967 to 1974 he learnt the intricacies of the travel business through his association with several foreign airlines.

In May 1974, Naresh Goyal founded Jetair (Private) Limited to look after Sales and Marketing operations of foreign airlines in India. Naresh Goyal was involved in developing studies of traffic patterns, route structures, and operational economics and flight scheduling. His rich and varied experience made him an authority in the world of aviation and travel.

In 1991, when the Indian economy was being opened up, Naresh Goyal took advantage of Open Skies Policy of the Government of India and set up Jet Airways for the operation of scheduled air services on domestic sectors in India. Jet Airways started commercial operations on May 05, 1993.

Today, Jet Airways has evolved into India's largest private domestic airline. Jet Airways has been voted India's "Best Domestic Airline" by several organisations of world-class repute. In 2005, Jet Airways came up with an IPO and it was a huge success. Jet Airways was recently in controversy over its merger deal with Air Sahara. The merger was called off and the too airlines are currently considering arbitration.

Along with Jet's meteoric rise, Naresh Goyal too rose in the entrepreneurial arena. He has won several honors and accolades. These include Entrepreneur of the Year Award for Services' from Ernst & Young in 2000, 'Distinguished Alumni Award-2000 for meritorious and distinguished performance as an Entrepreneur', Outstanding Asian-Indian' award for leadership and contribution to the global community given by the Indian American Centre for Political Awareness, 'Aerospace Laurels' for outstanding contribution in the field of Commercial Air Transport twice, in April 2000 and February 2004. Naresh Goyal also received the first BM Munjal Award for Excellence in Learning & Development in the Private Sector category in 2006.