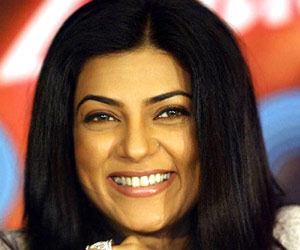 First Indian lady to win the crown of Miss Universe, she was born on the November 19, 1975 in Allahabad, Uttar Pradesh. Well, we are talking about the gorgeous Sushmita Sen. In this article; we will present you with the biography of Sushmita Sen, who is an epitome of Indian beauty.

Sushmita Sen is the daughter of retired Indian Air Force officer. Her mother was a fashion and jewelry designer. She was born in Allahabad and brought up in Delhi. She did her schooling from Air Force Golden Jubilee Institute in Delhi. She graduated in English literature and decided to pursue career in journalism.

In the year 2000, she decided to play a real life role of a single mother. She adopted a baby girl in 2000 and named her Renee. Later in 2010 she adopted another three month old girl and named here Alisah. She has always been enthusiastic about participating in events meant for social concern. She even went to Pakistan in the year 2005 as a part of peace efforts.

She has always been in the gossip columns of newspapers for her relationship with Randeep Huda, Sanjay Narang etc. Presently, she is dating Manav Menon, who is an ad executive.

Miss Universe Title
At a young age of eighteen in the year 1994, Sushmita Sen participated in the Miss Universe pageant and won the crown. She is the first Indian lady to achieve the title of Miss Universe. She made our country proud. Her biggest rival was Aishwarya Rai, who went for the Miss World beauty contest and won the title.

Film Career
After winning the title of Miss Universe, she decided to enter Bollywood. Her first movie Rakshakan was in Tamil. But, it did not succeed. Her Hindi movie Dastak that was released in the year 1996 could not earn much of business. The response of audience was lukewarm. She got a major break when she signed for the role of a second woman in David Dhawan's film 'Biwi No 1' in 1999. It also brought her the Filmfare award for best supporting actress.

One of her biggest hits till date is the film Main Hoon Na that was released in the year 2004, in which she was starred opposite to Shahrukh Khan. She has done quite a number of challenging roles in her film career and come out victoriously, thus proving her talent. She has worked with a number of Bollywood stars. Her recent most movies include Karma, Confessions and Holi (2006) & Ram Gopal Varma Ke Sholay (2006).

Things to know about Sushmita Sen and her daughters, Renee and Alisah!