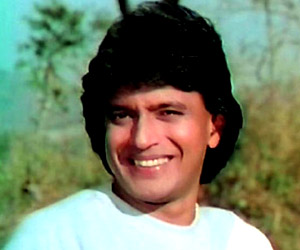 Born - 16 June 1950
Achievements - Actor Mithun Chakraborty virtually ruled the Indian Bollywood film industry during the 1980s following the release of movies like Disco Dancer et al. If one includes all the regional films in the list, then Mithun Chakraborty can be said to have worked in over 200 Indian films. He also operates a string of hotels by the name of Monarch.

Actor Mithun Chakraborty, who originally used to be known by the name of Gouranga Chakraborty, virtually ruled the Indian Bollywood film industry during the 1980s. If one includes all the regional films in the list, then Mithun Chakraborty can be said to have worked in over 200 Indian films. Apart from Hindi, he has also worked in some Bengali and Bhojpuri movies. He also operates a string of hotels by the name of Monarch. The actor is married to Indian actress, Yogita Bali and has three sons and one daughter.

Read on more about the biography of Mithun Chakraborty, who was born at Barisal that is now located in Bangladesh. He, however, graduated from the Scottish Church College in the Indian state of Kolkata. And after this, he attended the reputed Film and Television Institute of India (FTII). It was in the year 1976 that Mithun Chakraborty debuted in the film Mrigaya directed by Mrinal Sen, for which he was given the prestigious National Film Award for Best Actor. But his next films, Do Anjaane and Phool Khile Hain Gulshan fared averagely.

The period following the 1970s brought in some fresh change for Mithun Chakraborty, who shot to fame with movies like Surakshaa, Hum Paanch and Wardaat that was a sequel of Surakshaa. His fortune changed completely for the better after he starred in the musical film, Disco Dancer in 1982. It witnessed tremendous success because of its interesting storyline, oodles of dances and feet tapping music that remains a cult favorite even in present times. Another movie that had cult following was Gunda. Here's more about Mithun's life history.

Then there were other musical films like Kasam Paida Karne Wale Ki and Dance Dance that popularized Mithun Chakraborty as a talented dancer. Some other hit movies he worked in were Mujhe Insaaf Chahiye (1983), Pyaar Jhukta Nahin (1985), Swarg Se Sunder (1986), and Pyaar Ka Mandir (1988). All these movies remain his most commercially successful ones to date. His image then changed from a flamboyant one to an action hero with the coming of movies like Wanted (1983), Boxer (1984), Jagir (1984), Jaal (1986), Watan Ke Rakhwale, etc.

Apart from commercial success, Mithun has also received rave critical acclaim. His acting in his first film Mrigaya and others like Tahader Katha and Swami Vivekananda were much liked and fetched him National film awards. In 1990, he was given the Filmfare Best Supporting Actor Award for his performance in Agneepath and the Filmfare Best Villain Award for acting in Jallad. During 1990s, Mithun shifted his attention to low-budget B-grade movies. He, however, made a comeback to the mainstream with Mani Ratnam's Guru in 2005.