Here is given the biography of the famous Indian actress Rekha. Check out the life history & works of Rekha.
Home : Famous Indians : India Film Personalities : Rekha 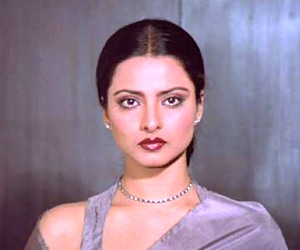 Rekha was born as Bhanurekha Ganesan on the 10th of October in 1954 in Chennai. She is one of the most brilliant as well gorgeous actresses of Bollywood. Well, in this article, we will present you with the biography of Indian actress Rekha.

Early life
Acting is in her blood. Her father Gemini Ganesan was a well known Tamil actor and her mother Pushpavalli was a Telugu actress. It is said that her parents did not tie wedding knots. Infact, people are of the say that, when Rekha was born, her father didn't even make the declaration of his paternity. It was in the early 1970s that, she established her foot in the Indian film industry. To know the complete life history of Rekha, read on.

She is believed to have had several relationships. She became the hottest topic of gossip. All the magazines and newspapers were filled with rumors of Rekha's relationship with Bollywood stars Jeetendra, Vinod Mehra, Kiran Kumar, and Amitabh Bachchan. But, none of the relationships worked out and she finally got married to a Delhi based businessman Mukesh Aggarwal in the year 1990. However, he committed suicide the next year in 1991.

Film Career
Rekha made her first public appearance as a child artist in the Telugu film Rangula Ratnam (1966). Goadalli CID 999, a Kannada film was her first film in which she played the lead role of heroine. She worked in a number of Telugu, Kannada and Hindi films. Her Hindi film Sawan Bhadon was a major hit in the box office. This film brought her stardom overnight. After that, she was offered plenty of roles, but most of the roles demanded her to be portrayed as a glamour girl.

She did a number of films, some of which were very successful. To name a few, we have Kahani Kismat Ki, Raampur Ka Lakshman, and Pran Jaaye Par Vachan Na Jaaye. She got her first serious role in 1976, when she was signed for 'Do Anjaane' with Amitabh Bachchan. After that, she was offered lot of challenging roles of different genre and she took up the challenge and proved her worth. Muqaddar Ka Sikandar brought a lot of name and fame. Then, she kept climbing the ladders of success.