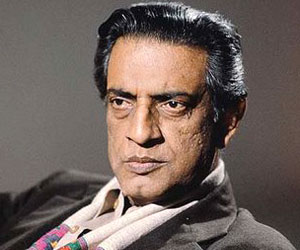 Born: May 2, 1921
Died: April 23, 1992
Achievements: As a filmmaker he made a mark all over the world. Honored with Lifetime Achievement Oscar Award and Bharat Ratna.

Satyajit Ray was a giant of Indian cinema. He was an excellent filmmaker and his films made a mark all over the world. He is one of the few Indian filmmakers whose work has been acknowledged abroad. For his invaluable contribution to the world of cinema Satyajit Ray was honored with Oscar Award for Lifetime Achievement.

Satyajit Ray was born on May 2, 1921, in an intellectual and affluent family in Calcutta. His father's name was Sukumar Ray and his mother's name was Suprabha Ray. His grandfather, Upendrakishore Ray was a distinguished writer, painter, a violin player and a composer. He was also a pioneer in half-tone block making and founded one of the finest presses in the country - U. Ray & Sons. In 1880s, Ray family had embraced 'Brahmo Samaj', sect within Hindu society. The progressive outlook of the Brahmo Samaj strongly influenced Satyajit Ray's work.

In 1923, when Satyajit was only 2-years-old his father Sukumar Ray died of kala-azar. In 1926, about three years after his father's death, the ancestral printing business changed hands and Satyajit and his mother had to move out of their spacious house. Satyajit Ray moved to his maternal uncle's house along with his mother.

At an age of eight, Satyajit joined Ballygunj Government School. He was an average student. While he was at school he developed interest in films. He regularly read Hollywood trivia in magazines and also developed interest in Western classical music. In 1936, Satyajit Ray passed his matriculation and joined Presidency College for further studies. He graduated in economics in 1939. He decided to give up further studies.

Satyajit Ray had a natural flair for drawing and he wanted to become a commercial artist. At the suggestion of his mother he joined Rabindranath Tagore's Vishva-Bharati University at Shantiniketan in 1940. Trips to nearby villages for sketching exercises, were his first encounters with rural India. During this period, he discovered the oriental art-Indian sculpture and miniature painting, Japanese woodcuts and Chinese landscapes et al.

At Shantiniketan Satyajit Ray also found means to pursue his interest in music and films. A German Jew, professor of English, had a collection of western classical records. Ray would often listen to music at his cottage in the evenings. He also found books on cinema in the university library. In 1942, Satyajit Ray left Shantiniketan.

In April 1943, Satyajit Ray joined a British-run advertising agency, D.J. Keymer, as a junior visualiser. Within a few years, he rose to be its art director. In 1948, he married Bijoya Das, a former actress/singer who also happened to be his cousin. In 1950, Satyajit Ray went on a business trip to London, along with his wife. With him, he was carrying a notebook in which he had made some notes on making a film of Pather Panchali. He wanted the film to be shot on actual locations, no make-up with new faces. Shooting on locations with unknown actors was thought be a totally unfeasible idea in those times and he received negative reaction from most of his friends in this regard.

In this six-months long stay abroad, Satyajit Ray saw about a hundred films including Vittorio De Sica's Bicycle Thieves. The film made a profound impression on Satyajit Ray. Bicycle Thieves reconfirmed his conviction that it was possible to make realistic cinema with an almost entirely amateur cast and shooting at actual locations.

After his return in late 1950, with absolutely no experience in movie-making, Satyajit Ray collected a group of young men to work as technicians. While looking for financial backers, he approached widow of Bibhuti Bhusan Banerjee, the writer of Pather Panchali for film rights. She gave her oral assurance and retained her faith in Satyajit Ray despite a better financial offer. Satyajit Ray spent two years in vain looking for a producer.

Unable to find a producer, Satyajit Ray decided that unless he could prove his bona fides by producing a few sequences of the film, he was not likely to find financial backing. He borrowed money and shot a few scenes. The cast was a mix of professional actors and a few with no prior experience in acting. Only Subir Banerjee who played Apu, Karuna Banerjee who played Apu's mother, and the villagers who played other smaller roles, had no prior experience of acting. The rest had either acted in films or theatre. Boral, a small village on the outskirts of Calcutta was the major location, where the film was shot.

Meanwhile, the State Government of West Bengal agreed to fund the film. The money from the Government came in installments and before each installment, the accounts had to be submitted and cleared by the government. This was a time consuming process. Finally, on August 26, 1955, Pather Panchali was released in Calcutta. It was a box-office success. The film was sent to the Cannes Films festival, 1956 and won Grand Prix at the Cannes Festival.

Pather Panchali firmly established Satyajit Ray as a world-class director and gave him total control over his subsequent films. Two sequels based on the novel (Aparajito, The Unvanquished, 1956; Apur Sansar, The World of Apu, 1959) completed the famous 'The Apu Trilogy'.

In 1992, he accepted a Lifetime Achievement Oscar from his sickbed in Calcutta through a special live satellite-television event and was honored with Bharat Ratna, the highest civilian award in India. Satyajit Ray died on April 23, 1992.