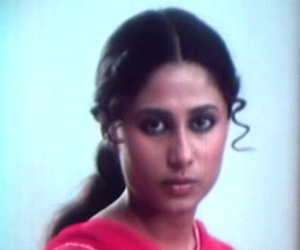 Smita Patil (1955 - 13 December 1986) is one among the few versatile Indian actresses, who have made a special position in the hearts of people. She was indeed the pride of Bollywood. She has given superb performances in her movies, for which she is admired even today. Well, in this article, we will present you with the biography of Indian actress Smita Patil.

Career
She has worked with wonderful directors like Govind Nihalani, Shyam Benegal, and Mrinal Sen. She has performed in a number of Hindi and Marathi films. She is the queen of Indian cinema. For some time, she also took the job of a TV news reader. She was a great photographer. She was a multifaceted personality. She had dominated the Indian film industry during the 1970s and 1980s.

Smita was an alumna of the Film and Television Institute of India, Pune. In the year 1977, she received the National Award for best actress for her remarkable performance in the film Bhumika. In most of her films, she was portrayed as a very strong woman, who is able to endure the pressures created by the male dominated society.

Apart from being an actress, she was also an activist who raised several women issues. She tied her wedding knots with the well known Bollywood actor Raj Babbar. She did not survive for long. Due to complications arising from the birth of son, she died on the December 13, 1986.