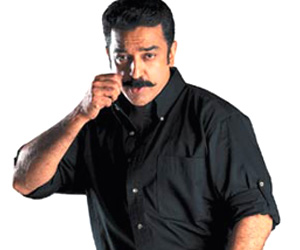 Born - 7 November 1954
Achievements - Kamal Haasan is one of India's most proficient actors, who started his acting career as a child artist. He has worked in some 200 Indian movies and has been honored with the National Film Award four times. Throughout his life, he has also been an avid theatre artist.

Kamal Haasan is one of India's most proficient actors. Born on 7 November 1954, Kamal Haasan began his career in movies as a child artist. Thereafter, he went to work in some 200 Indian movies and has been honored with the National Film Award four times. Throughout his life, he has also been an avid theatre artist. In order to underscore his contribution to Indian cinema, the Government of India conferred upon him the country's fourth highest civilian honor, the Padma Shri in the year 1990.

Read on about the biography of Kamal Haasan, who is the youngest of the four children born to Rajalakshmi and Srinivasan. He has a plethora of good films to his credit like Moondram Pirai (1982), Saagara Sangamam (1983), Nayagan (1987), Indian (1996) and Hey Ram (2000). Kamal Haasan is also an incredible playback singer and has even written the lyrics of a number of his film songs. A bundle of talent, Haasan is also a Bharatanatyam dancer and has choreographed few dances for his movies.

The life history of Kamal Haasan's career kick started in the 1960s at the age of six, when he debuted into films with Kalathur Kannamma. This movie was made by AVM production and won him the first National Award for Best Child Artist. As an adult actor, Kamal Haasan received a mixed response with movies like Avargal, Aval Oru Thodarkathai, Solla Thaan Ninaikkiren, Maanavan and Kumara Vijayam. His time changed for the better with the release of 16 Vayathinile with Sridevi.

Kamal Haasan and Sri Devi became a popular acting pair and acted together in 23 films. In many films that came out in late 1970s, Haasan was usually the hero with Rajinikanth as the villain. This was the time he started experimenting with his roles and essayed various genres like that of a village innocent in 16 Vayathinile, a disco jockey in Ilamai Oonjaladugiradhu, a psychopath serial killer of women in Sigappu Rojakkal and so on. He has received many awards for acting.