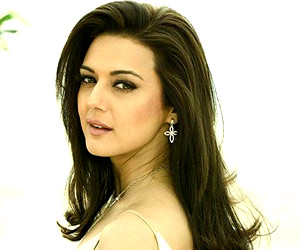 Preity Zinta is a well known face of the Indian film industry. She was born on the 31st of January in the year 1975 in Shimla, Himachal Pradesh. She is one of the leading actresses of the Indian mainstream cinema. Within a short span of time, she has gained lot of fame and fortune. Well, in this article, we will present you with the biography of the famous Bollywood actress Preity Zinta.

Life History
She was born in a Hindu Rajput family of Rohru in Simla. Earlier, she planned to pursue English Honors, but later she changed her mind and decided to study Psychology. She graduated from St. Bedes College. In the beginning, she worked as a model and also did quite a number of commercials. She comes from a defense background. Her father Durganand Zinta was an Indian army officer. Preity lost her father in a car accident, when she was only thirteen years old. Her mother was also severely injured. She also has two brothers Deepankar Zinta and Manish Zinta.

At present, Preity Zinta is having a relationship with Ness Wadia, the Bombay Dyeing heir. Well, every now and then, we do keep hearing rumors that the pair has split up. However, Preity Zinta always puts an end on these kinds of rumors. Infact, in a recently held award function, she was seen holding hands with him. Many a times, she is linked with different Bollywood stars, but Preity Zinta has always denied her relation.

Film Career
She got her first break in Kundan Shah's film 'Kya Kehna', which was released in the year 2000. Her next film 'Soldier' also got delayed. From this point of view, her debut film was Dil Se, in which her performance was simply superb. It was a major breakthrough in her life, which brought her the Filmfare Best Debut Award. Kya Kehna and Soldier were also quite popular. In Kya Kehna, she played the role of a teenage single mother. She did a wonderful job, which was well applauded.

She came into limelight with her big hit movies. Thereafter, she was offered plenty of roles to perform. She was given the leading role of heroine to play in the film Dil Hai Tumhara. She was given a very different kind of role to play in the movie. It was a major milestone in Preity's career. Her movies Chori Chori Chupke Chupke, Kal Ho Naa Ho, Veer Zara and Salaam Namaste were super hit in the box office.