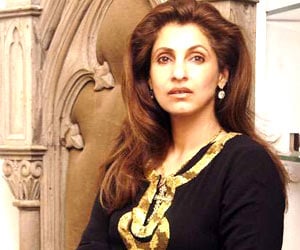 A famous Bollywood personality, she is well known for her glamorous looks. She has worked in quite a number of films and earned name and fame. Well, we are talking about the actress Dimple Kapadia, who began her career at a young age of sixteen. In this article, we will present you with the biography of Indian actress Dimple Kapadia.

She was born on June 8, 1957 as the daughter of Chunnibhai Kapadia and Betty. Her father was a Gujarati entrepreneur. She tied her wedding knots with renowned Bollywood actor Rajesh Khanna about six months prior to the release of her debut film Bobby. The couple was blessed with two daughters. So, despite her flourishing career, Dimple Kapadia took a long break from Bollywood to raise her daughters Twinkle Khanna and Rinke Khanna.

Her married life was not smooth and she did confess that the she regretted getting married to Rajesh Khanna however the couple never got a divorce, they instead maintained separate residences. After getting divorce, she took up acting once again. Her daughters have also joined the film industry. To know the complete life history of Dimple Kapadia, read on.

Dimple Kapadia is a discovery of Raj Kapoor, who introduced her to the Indian film industry in the year 1973. Her debut film was Bobby, which was a big hit in the box office. Despite the super success of the film, Dimple decided to quit Bollywood and take care of her kids.

Her marriage was a failure and she took divorce. After this tough phase of her life, she decided to make a comeback in the films. In 1985, she did her next film "Saagar" in which she was starred opposite to Rishi Kapoor. During 1980s and 1990s, she gave performances in a number of films. Infact, she was one of the most dominant personalities of that period.

One of her best performances has been in the film "Rudaali", which was highly praised and also brought her National Film Award for Best Actress. She played the role of an alcoholic in the film "Dil Chahta Hai", which was widely appreciated. In the year 2006, she did her first movie in English language "Being Cyrus".