Madhuri Dixit is an Indian actress who is counted among the greatest Indian actresses of all time. Often hailed as the “Queen of Bollywood”, Madhuri Dixit has appeared in more than 70 Hindi films and is the recipient of numerous accolades.
Home : Famous Indians : India Film Personalities : Madhuri Dixit 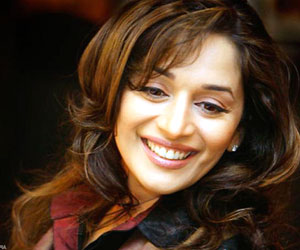 Madhuri Dixit is an Indian actress who is counted among the greatest Indian actresses of all time. She is also a producer and TV personality. Often hailed as the “Queen of Bollywood”, Madhuri Dixit has appeared in more than 70 Hindi films and is the recipient of numerous accolades, including six Filmfare Awards. She is a professionally trained dancer. As a young girl, she wanted to become a microbiologist and enrolled at Sathaye College to pursue this goal. However, she changed her mind within months and chose to drop out to act in films. Despite being beautiful, talented, and graceful, she struggled initially as many of her films failed to impress the audiences. Her luck changed with the release of 'Tezaab' in 1988 and soon she established herself as a bankable star in Bollywood. At the peak of her career, she left the film industry to get married and raise a family. She has since made her comeback and has appeared in movies like 'Bucket List' and 'Total Dhamaal.' Some of the top films of Madhuri Dixit are ‘Dil’, ‘Beta’, ‘Hum Aapke Hain Koun..!’ and ‘Devdas’. She is also engaged in philanthropic activities and has worked with UNICEF. She has been honored with Padma Shri--the fourth highest civilian honor of the country--by the Government of India.

Early Life
Madhuri Dixit was born on 15 May 1967, in Mumbai (then Bombay), Maharashtra, to Shankar and Snehlata Dixit. The youngest of four siblings, she has two sisters and one brother. She began displaying an interest in dance as a little girl of three. Her parents recognized her interest and arranged dance lessons for her. She received training in Kathak for eight years.

She studied at Divine Child High School. As a student, she was active in dramatics as well. She aspired to become a microbiologist and enrolled at Sathaye College where one of her subjects was microbiology. However, within six months she changed her mind and realized that acting was her true calling. Thus, she quit the course to pursue a career in acting.

Career
In 1984, Madhuri Dixit made her debut with the film ‘Abodh.’ The film failed to garner much attention. In the next couple of years, she appeared in a few other forgettable movies like the dramas ‘Awara Baap’ (1985) and ‘Swati’ (1986). She eventually got her breakthrough role in the 1988 film ‘Tezaab,’ where she was paired opposite Anil Kapoor. The film garnered critical acclaim and Madhuri was praised for her performance. She earned her first ever nomination for Filmfare Best Actress Award.

She was once again paired with Anil Kapoor in ‘Vardi’ and ‘Ram Lakhan,’ both of which were released in 1989. The same year, she also appeared in the action-thriller 'Tridev,' which became one of the biggest hits of the year, and 'Parinda,' another box office hit. Her performance in the latter was appreciated by critics.

She began the 1990s decade with a bang, appearing in nine films in 1990. However, most of these releases proved to be box office flops. Her fortunes turned with the release of the romantic drama ‘Dil,’ in which she starred opposite Aamir Khan. The film became a major hit and earned Madhuri Dixit her first Filmfare Best Actress Award. In 1992, she once again shared the screen with Anil Kapoor in ‘Beta,’ in which she played the role of an educated young woman who rebels against her evil stepmother-in-law. The movie was a big hit and earned the actress another Filmfare Best Actress Award.

Madhuri Dixit collaborated with the upcoming superstar Shah Rukh Khan for the first time in the movie 'Anjaam' in 1994. The same year, she starred in the family drama 'Hum Aapke Hain Koun..!' opposite Salman Khan. The movie was a super-hit and became Bollywood’s highest-grossing film at the time. The mid-1990s proved to be extremely productive for the actress. In the ensuing years, she appeared in many other hit movies like 'Raja' (1995), opposite Sanjay Kapoor; 'Koyla' (1997), opposite Shah Rukh Khan; and 'Mrityudand' (1997) alongside Shabana Azmi and Shilpa Shirodkar. In 1997, she also acted in the love triangle 'Dil To Pagal Hai,' co-starring Shah Rukh Khan and Karisma Kapoor.

Madhuri Dixit began the new millennium with the films ‘Pukar’ and ‘Gaja Gamini.’ In 2001, she appeared in ‘Lajja,’ in the role of a woman fighting against gender discrimination. The following year, she acted in ‘Devdas’ opposite Shah Rukh Khan, playing the role of a courtesan in love with an alcoholic. Pregnant with her first child while shooting for the film, the actress took a hiatus to focus on her family.

After five years, Madhuri Dixit made her comeback with the movie ‘Aaja Nachle’ (2007). She was praised for her performance even though the film flopped at the box office. She didn’t appear in any films for several years. In 2014, she appeared in ‘Dedh Ishqiya,’ a black comedy film. The same year, she also acted in the action crime drama ‘Gulaab Gang.’

In 2018, she made her debut in Marathi cinema with the comedy-drama 'Bucket List.' The following year, she appeared in 'Total Dhamaal' (also known as 'Dhamaal 3'), an adventure comedy film featuring a large ensemble cast. The film was a major box office success, earning ₹2.28 billion worldwide.

Besides films, Madhuri Dixit has also been active on television. She was a jury member of the dance competition show ‘So You Think You Can Dance’ (2016) and was a judge in the first and second seasons of Colors TV’s ‘Dance Deewane’ (2018-19).

Marriage & Family
While at the peak of her career, Madhuri Dixit was linked with many of her male co-stars, including Sanjay Dutt, Jackie Shroff, and Mithun Chakraborty. She put all the media speculation over her love life to rest when she announced the news of her marriage to Dr. Shriram Madhav Nene, a cardiovascular surgeon from Los Angeles. The couple tied the knot on 17 October 1999, in a traditional Hindu ceremony. According to reports, Dr. Nene wasn’t aware of the extent of Madhuri’s celebrity status at the time of their marriage!