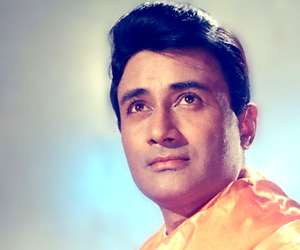 Born - 26 September 1923
Achievements - Dev Anand is amongst the most distinguished actors of the Indian film industry. A fast dialogue delivery style and nodding while doing do so was the famous trademarks of Dev's acting in movies that was not only well received by the audiences, but also hugely copied. He has worked in several super hit films and won several awards.

Dev Anand is amongst the most distinguished actors of the Indian film industry. At the time when his stardom was at its pinnacle, Dev Anand was considered the most suave among his contemporaries. Born on 26 September 1923 at Gurdaspur in undivided Punjab, Dev Anand who was originally called Dharam Dev Anand, is the second of three brothers. Elder brother, Chetan Anand was a film director and so was his younger one, Vijay Anand. Dev Anand was also a film producer. Read on more about the biography of Dev Anand.

It was the passion for acting for which Dev Anand left his home for the movie industry hub in India i.e. Mumbai city. And it was here, he started his career at the military censor office at Churchgate for a salary of Rs 160. Luck favored Dev Anand and he soon got an opportunity to work as actor in the film Hum Ek Hain in 1946. However, the first big break came when Dev Anand was offered role for the Bombay Talkies production 'Ziddi' in 1948 and it became a huge hit.

The history of Dev Anand's life and career took another crucial turn when he launched his own company 'Navketan' in 1949. Though his first film flopped, his next movie 'Hare Rama Hare Krishna' released in 1971 with Zeenat Aman turned out to be a blockbuster hit. Things only smoothened out further with time for Dev Anand, who essayed even negative characters like in the film Jaal. Taxi Driver was declared another mega hit.

A fast dialogue delivery style and nodding while doing do soon became the famous trademarks of Dev's acting in movies like Munimji, CID and Paying Guest. His acting was not only well received by the audiences, but also hugely copied. Though he received a moderate flaking by the critics, he shut them all up through his classic acting in 1958's Kala Pani. He won the Best Actor Award for this film.

Most of Dev Anand's movies explored his viewpoint of the world and often highlighted many socially relevant topics. Another notable feature in Anand's movie was the soul stirring music. He was on very friendly terms with most of the Bollywood music composers like O. P. Nayyar, Sachin Dev Burman and his son, Rahul Dev Burman. Others known to Dev Anand were lyricists Majrooh Sultanpuri, Neeraj, Shailendra, and playback singers Mohammad Rafi and Kishore Kumar.