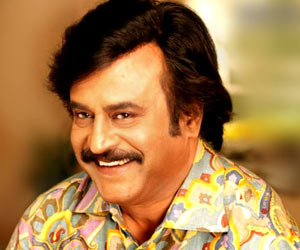 Born - 12 December 1949
Achievements - Rajinikanth is an immensely popular actor of the South Indian film industry. Recipient of the coveted Padma Shri Award in the year 2002, he has worked in a string of hit films like Murattukaalai, Pokkiri Raja, Thanikattu Raja, Naan Mahaan Alla and Moondru Mugam.

Rajinikanth is a celebrated actor of the South Indian film industry i.e. Tollywood. Born on 12 December 1949, Rajnikanth's was originally named Shivaji Rao Gaekwad. The most unique feature about Rajnikanth's acting is that he can enact comedies, drama, suspense and thrillers with absolute ease. In recognition of marvelous contribution to Indian cinema, he was recently awarded the Padma Bhushan by the Government of India in the year 2002. To know more, read on this biography of Rajnikanth.

Rajinikanth hails from a Marathi family of Bangalore in the Karnataka state and was the fourth child of his parents, Jijabai and Ramoji Rao. Although his mother tongue is Marathi, yet Rajnikanth never acted in any Marathi movies till date. His childhood was spent in poverty and he worked as a bus conductor prior his film career. However, it was during this period that Rajnikanth sharpened his acting skill by participating in various theatre plays. In the year, 1973, he joined the Madras Film institute to acquire a basic course in acting.

Initially while working in Tamil cinema, Rajnikanth was given supporting roles like that of a cancer patient in the 1975 film, Apoorva Raagangal directed by K. Balachander. Balachander gave Rajnikanth the name, by which the world now acknowledges him. But it was director, SP Muthuraman who actually revamped Rajnikanth's image by casting him in varied roles. For instance, Rajnikanth was given a positive role in film, Bhuvana Oru Kelvikkuri (1977). By this time, film Mullum Malarum had Rajnikanth a firm foothold in the Tamil film arena.

The period from 1980 to1989 was the real turning point in the career of Rajnikanth as it took him to soaring really high. However, Rajinikanth abruptly decided to leave acting, but ultimately was coaxed back into it after sometime. He starred in Billa that was a remake of Amitabh Bachchan's Don and it turned out to be a blockbuster hit silencing all his critiques. This was followed by more successful films like Murattukaalai, Pokkiri Raja, Thanikattu Raja, Naan Mahaan Alla and Moondru Mugam.

That popularity of Rajnikanth can simply be gauged by the fact that even two decades after the release of his old hits, they continue to make profits at the box office. K. Balachander's first home production, Netrikan proved to be yet another milestone in Rajini's career. And in his 100th movie, Sri Raghavendra, he played the Hindu saint Raghavendra Swami. Another of Rajnikanth's recent hits was Shivaji released in the first half of 2007.