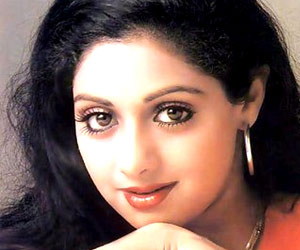 Born as Sridevi Ayyapan on the 13th of August in 1963 at Sivakasi in Tamil Nadu, she was a great Indian actress. She worked in a large number of Hindi, Malayalam, Tamil, Telugu, and Kannada films. Well, in this article, we will present you with the biography of Indian Actress Sridevi.

Life
Sridevi lost her father when she was shooting for the film Lamhe and mother, while shooting for the film Judaai. She lost her parents when she was very young. There was a rumor during the period between 1986 and 1987 that Sri Devi had an affair with the Bollywood actor Mithun Chakravorty. But, the relationship came to an end, when Mithun did not divorce his wife Yogita Bali. On June 2, 1996, Sridevi tied her wedding knots with the film producer Boney Kapoor. They have two daughters named Janvi and Khushi. She did a lot of films with her brother-in-law Anil Kapoor. Read on to know the complete life history of Sreedevi.

Film Career
Sridevi made her first public appearance as a child artist in the Tamil film Kandhan Karunai (1967). In the beginning of her career, she gave performances in numerous Tamil and Malayalam movies. Some of her best Malayalam movies are Aalinganam, Kuttavum Sikshaiyum, Aadhyapaadam, Aa Nimisham. In the year 1976, she got a major break in the Tamil movies in the lead role. Here, she got the opportunity to work with two great actors, namely Kamal Hassan and Rajnikanth.

In the year 1978, she made her entry in the Hindi films. Her debut Hindi film was Solva Saawan, which unfortunately did not succeed. But, her second film Himmatwala was a super duper hit. The movie made her a star overnight. Thereafter, she signed the film Sadma, which brought her lot of appreciation. During 1980s, she gave fabulous performances, which were admired by all. Her film Chandni was the biggest hit, which brought her in the list of one of the highest paid actresses of Bollywood. She worked in a number of films and has had a very prosperous career. After working in Judaai she took a break from the film industry because she wanted to dedicate her time to her two daughters. After six years, she appeared on the small screen in a couple of TV serials after which she appeared in her first movie in 15 years English Vinglish. For her comeback with a movie that did exceedingly well, her comeback was labled the most successful comeback ever.