The Pallavas were essentially a pastoral tribe who ruled the southern parts of India for almost 500 years. They were great conquerors and left a huge impact in the field of art and architecture. Initially, the Pallava dynasty conquered the region of Thondaimandalam that was located at Pallavapuri, India. However, this region was washed by the sea due to some unforeseen natural disaster. Thus they moved further south and established the powerful Pallava Empire. Their territory extended from Northern Orissa to Tanjore and Trichi in far south. Their new capital was Kanchipuram. 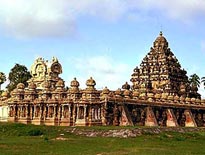 After the death of Simha Vishnu, his son Mahendravarman became the king. Mahendravarman was a very efficient ruler and a learned man. He initiated the construction of the famous cave temple at Mahabalipuram. However, the tales of prosperity reached far and wide and Chalukya Pulakesi-II learnt about the richness and abundance of the kingdom. He attacked the kingdom and defeated Mahendravarman. The defeat in the battle was the main cause of the death of Mahendravarman. He was succeeded by his son Narasimhavarman.

Narasimhavarman vowed to take revenge for the death of his father. He was a well built man who was also very intelligent. With much planning and tact, he virtually destroyed the kingdom of Chalukya Pulakesi. Then, he continued the continued the construction of the cave temple which was stalled temporarily. He got the title of "Mamalla", which could be the reason why Mahabalipuram is also known as Mamallapuram. Apart from this temple, he also got many temples constructed all over his kingdom. His successors managed to retain the power of the empire but finally lost to the Cholas, who put an end to this dynasty.