Ranked as the world's fifth largest religion in the world, Sikh religion was founded around 500 years ago by Guru Nanak Dev Ji. Today the religion has over 20 million strong devotees all over the world. Sikhism preaches that there is only one God and denounces any kind of ritualism or superstitions. The history of Sikhism is enriched with valuable teachings of the ten enlightened Sikh Gurus. These teachings are compiled in a holy book known as Guru Granth Sahib. The book does not narrate the lives of the Gurus, but instead highlights the teachings and message of universal love given by the Gurus. You shall find much information about Sikhism belief in our related sections. 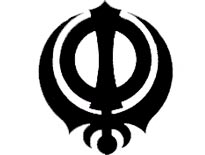 Guru Nanak Dev was the founder of Sikhism is considered to be the first Sikh guru. Guru Nanak Dev was born on 20th October, 1469 in a place called Nankana located in the present day Pakistan. Guru Nanak is revered by both Hindus and Muslims alike and his teachings are practical and emphasize on peaceful co-existence rather than conducting rituals and performing religious rites.

Sikh Khalsa
Khalsa in Sikhs was started off by Guru Gobind Singh, the tenth Guru of Sikhs. The basic meaning and essence of Khalsa is "Pure" and it is the title given to those Sikhs who have tasted Amrit or in other words, have been baptized. The rise of the Sikh Khalsa force dates back to 13th April, 1699 at a place called Anandpur Sahib in India.

Sikh Gurus
The religion of Sikhism was founded and established by Sikh Gurus. The teachings and philosophies of the 10 Sikh gurus have made the foundation of the Sikh religion really strong. These Gurus were believed to have been sent from the heavens above and their mission in human life was to enlighten people and spread the message of love and peace. Each of the ten Gurus made his own contribution to the religious philosophies and ideals and they are as practical today as they were back then.