The epicenter of the Harappan civilization was in the fertile plains of River Indus. The settlements have been found as far as Baluchistan in Pakistan and Gangetic plain in India. It is estimated that around 5000 years back, a group of nomads came to India from Sumeria, which is the modern day Iran. They passed through the Himalayas where they discovered a rich and fertile land which was irrigated by a number of rivers like Indus, Ravi, Chenab, Sutlej and Beas. This was the fertile plain of the modern day Punjab. As compared to Iran, which is essentially a desert and arid land, this land was blessed with ample water and other natural resources. There was enough wood to burn and enough clay to make bricks. 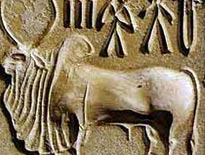 The real essence and foundation of civilization was formed by the twin cities of Harappa and Mohenjo-daro. This is because the kind of planning principles that were used over here have been followed without any changes at all other sites. The two cities were located at a distance of around 400 kilometers from each other. The planning of the cities was done brilliantly. They had strong outer walls for defense and were spread over a square mile. The street were planned and constructed in a way that it allowed smooth flow of traffic and smoothly rounded corners made sure that carts could turn easily without hassles.

The cities were divided into 12 major blocks. The basic unit of city planning was individual household. Their main occupation was agriculture. Their agriculture was highly productive and they generated surplus that could support thousands of urban residents who were not necessarily engaged in agriculture. The farmers made full use of the fertile lands that flourished in alluvial soil. Their irrigation method was highly advanced though there are no evidences to support the same. They could have been destroyed in the devastating floods that kept repeating every time.

Extensive excavation projects in this site have helped archaeologists and historians to understand the arts and crafts of this era. A variety of sculptures, seals, jewelry in gold, pottery and statues in bronze, terracotta and steatite have been found in these excavations. One of the most famous of these artifacts is the bronze statue of the slender limbed "Dancing Girl". This was found in the site of Mohenjo-daro. Many crafts like ceramics, shell carvings, make up items, special combs, etc. were also found, thus giving crucial idea about the lifestyle of these people.

The people of Indus valley civilization believed in Gods as well and certain seals show a figure sitting in a Yoga - like posture surrounded by animals. This figure was called Pashupati. Other seals show the symbol of Swastika embellished on them. They also worshipped a female entity, which was named as Mother Goddess. They carried on trade and transportation via a highly developed waterway. A canal that was built by them was found during excavations.

The civilization flourished for many years before finally declining rapidly. One of the main causes that contributed to the decline of Indus valley civilization is changing patterns of climate. Apparently the climate of Indus valley changed over the years making it colder and drier. As a result, the Ghaggar Hakra river system shrunk and its major portions dried up. It is also said that a major tectonic shift may have diverted the natural resources towards the Gangetic Plain. However, the real and definite cause for the decline of the civilization is not known and it is speculated to be a result of various factors including the above two.