The Mughal Empire in India lasted from 1526 to 1858. The Mughal dynasty was established by able Muslim rulers who came from the present day Uzbekistan. The Mughal rule in India saw the country being united as one single unit and being administered under one single powerful ruler. During the Mughal period, art and architecture flourished and many beautiful monuments were constructed. The rulers were skillful warriors and admirers of art as well. You shall find more information about the famous Mogul rulers in our related sections.

Akbar the Great
One of the greatest Mughal emperors to have ruled India was Akbar. He was popularly known as Akbar the Great because of his ability to rule efficiently and skillfully. Akbar was born on 23rd November, 1542 when his father Humayun and mother Hamida Bano were wandering in Iran.

Aurangzeb
The sixth ruler of Mughal Empire was Emperor Aurangzeb. He was the son of emperor Shah Jahan had his wife Mumtaz Mahal. He was born on 3rd November, 1618. A devout Muslim, he strictly adhered to Islam and made sure that his kingdom followed the same. 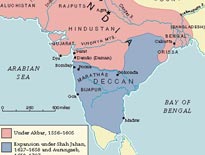 Emperor Babur has been known as the founder of Mughal Empire in India. He was born on 14th February, 1483 at a town called Andijan that is located in the present day Uzbekistan. He belonged to the Mongol tribe that also embraced Turkish and Persian.

Humayun
Emperor Humayun was the second Mughal emperor who ruled India. He was named Nasiruddin Humayun and was born on 6th March, 1508. He was declared emperor in the year 1530 and ascended the throne at the age of 22. Emperor Humayun lost the kingdom as soon as he gained it as he was inexperienced in handling a large empire.

Jahangir
Emperor Jahangir strengthened the Mughal Empire in India after his father Akbar. Jahangir was born on 31st August, 1569 and was named Nuruddin Salim Jahangir. Nuruddin has been derived from Arabic which means "light of faith". Jahangir is a Persian word which means "world conqueror".

Shah Jahan
Emperor Shah Jahan was the fifth Mughal ruler of India. He was born on 5th January, 1592 and it is said that during the reign of Shah Jahan, the Mughal Empire prospered greatly like never before. The name Shah Jahan has been derived from Persian and it means "Emperor of the World".