Magadha Empire gained much power and importance during the rule of King Bimbisara and his son and successor Ajatshatru. Bimbisara is said to have been murdered by his son Ajatshatru. The Magadha Empire in India extended in the modern day Bihar and Patna and some parts of Bengal. Magadha Empire was a part of the 16 Mahajanapadas. The empire extended up to River Ganges and the kingdoms of Kosala and Kashi were annexed. The places that came under the Magadha Empire were mostly republican in nature and the administration was divided into judicial, executive and military functions. 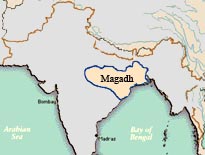 The Magadha Empire fought gruesome battles with most of its neighbors. They had advanced forms of weaponry andthe opposed forces did not stand a chance against them. Ajatshatru even built a huge fort at his capital Pataliputra. This was the place that Buddha prophesized would become a popular place of trade and commerce. With an unmatched military force, the Magadha Empire naturally had an upper hand over conquering neighborhood places and spreading the territory. This is what made it a major part of the 16 Mahajanapadas.