Art is an integral part of any civilization and ancient India flourished in this. The artifacts that have been discovered by archaeologists and historians reveal valuable facts about the lifestyle and mental patterns of that age. During ancient India various art forms developed at great pace. It is evident from the surviving art forms and literature that the ancient Indian art forms have great detailing and unique realistic style of their own.

According to the evidence found, it looks like people in ancient India were great admirers of different art forms. They loved fine arts and indulged in dancing, sculpting and painting. A very interesting aspect of ancient art in India is that it is highly realistic. Though bit crude, the anatomical detailing in their sculptures is worth applauding for. Animal and human figures have been carefully carved and chiseled to get a refined effect and portray the physical details in a very fine way. 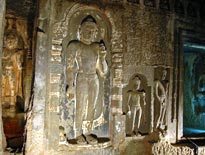 The fine artistic sensibilities of the people are pretty much evident in their terracotta and bronze sculptures. From the artifacts another interesting aspect that has come to light is the fact that musical instruments were used at that point of time. Certain seals and sculptures have inscriptions marked like instrument that looks somewhat like the harp. The paintings and inscriptions basically reveal the mental patterns of the people.

As time progressed, the cruder forms were refined and a new kind of art form developed. This was the art form of rock cut caves and temple art. Rock cut art and architecture was a very important step taken towards the progress of ancient Indian art. The rock cut architecture was first initiated by the Buddhists and this inspired Hindus and the Jains who built similar structures at sites like Ajanta, Badami, Ellora, Elephanta, etc. The patterns varied according to different regions they were built in. The expression of mental attitudes in the form of ancient art is truly fascinating and helps us analyze the journey traveled from then to now.