The Delhi Sultanate basically refers to the Muslim rulers who ruled India through Delhi. This basically came into existence after Mohammed Ghori captured Delhi after defeating Prithviraj. After Prithviraj was captured, the Delhi Sultanate went into the hands of one of Ghori's generals known as Qutub-ud-din Aibak. During the end of the 12th century, he established a series of rulers and this dynasty was called as the slave dynasty since the rulers had been military slaves. Read more about the history of the Delhi sultanate in India.

The extent of Delhi sultanate was till Bengal in the east and Deccan in the south. Even such a big sultanate faced constant threats from the North West and was also under pressure from internal politics within independent nobles. There was instability and unrest in the kingdom as there five dynasties that rose and fell which includes Slave dynasty, Khilji dynasty, Tughlaq dynasty, Sayyid dynasty and Lodhi dynasty. It was under the Khilji dynasty that most of South India was conquered. The territory was never fixed and depended upon the ability of the ruler as to how much was he able to conquer and control. 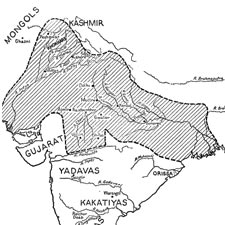 The effectiveness of a ruler during this time depended entirely upon his ability to conquer the places that fell near military highways and trade routes, collect land tax for revenue of the state and have firm authority over military and state governors. Agriculture and its related activities were the main source of livelihood in the kingdom but due to continued political unrest and instability, the peasants suffered greatly. During this time, Persian language developed to a great extent at the places where power was concentrated.

Indo Islamic Culture
With the coming of the Mughals in India and the Turkish rule, there were many developments and changes in the Indian culture. Not just culture, there were major developments in architecture and art. The indo Islamic culture was a blend of Hinduism and Islam. It was neither strict Hindu nor strict Islam.

Khilji Dynasty
After the decline of the Slave dynasty, the Sultanate became even more fragile and instable due to the numerous revolts and internal aggression. The Khilji dynasty started with the crowning of Jalaluddin Khilji by the nobles. This was around the year 1290 A.D. But within a few years, he was killed by his nephew Alauddin Khilji under a conspiracy hatched by the latter.

Lodi Dynasty
The Lodi dynasty in India arose around 1451 after the Sayyid dynasty. The Lodhi Empire was established by the Ghizlai tribe of the Afghans. They formed the last phase of the Delhi Sultanate. There were three main rulers in the history of Lodi dynasty.

Sayyid Dynasty
After the Tughlaq dynasty disintegrated, the Sayyid dynasty rose to power. They were essentially the rulers of the Delhi Sultanate of India and reigned from 1414 to 1451. The history of the Sayyid dynasty is not clearly known but they claimed to be the descendants of Prophet Mohammed.

Tughlaq Dynasty
The Tughlaqs were basically of Turkish origin and the family was essentially Muslim. Around the year 1321, Ghazi Tughlaq ascended the throne and was given the title Ghiyath al-Din Tughlaq. The Tughlaq dynasty was able to withhold its rule due to their strong allies like the Turks, Afghans and the Muslim warriors of south Asia.