The rule of the Cholas forms an important part in the history of South India. Chola rule saw remarkable progress in almost all spheres of life such as polity, culture and economy. During the 9th century, the Cholas gained control and overthrew the Pallavas. They primarily ruled in the south of India from the 9th to 13th Century. The Indian Chola Empire conquered not just the south of India but also extended their empire over the sea and ruled parts of the Maldives and Sri Lanka. The founder of the kingdom of Cholas was known by the name of Vijayalaya who conquered the kingdom of Tanjore during mid 8th century. The Chola dynasty is an important landmark in the history of India.

By the end of the 9th century, the Cholas firmly established their empire and exercised control over the south of India. This was during the reign of Rajaraja and his son Rajendra l. They were very ambitious rulers and defeated the Pandya and the Cheras of the south and captured their kingdoms. They had trade relations with west Asia, China and Southeast Asia that aided in enormous development of cities during the 11th century. Architecture and art was at its peak during the reign of the Cholas. The local administration system of the Cholas was amazing and reminds us of the modern day Pahchayati raj. 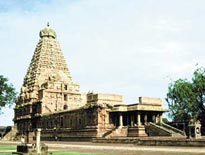 There were many developments in the culture and society during the Chola Empire. The main center for cultural and social gatherings was the temple. The temple was an institution in itself. The temple courtyard functioned as a school where students were taught the ancient Vedas and Holy Scriptures. The temples were built in the form of citadels where people could feel safe during an attack or aggression. The society was divided into Brahmins and non-Brahmins. This was the time when Bhakti cult emerged and Lord Shiva was worshipped as a symbol of fertility. Language developed immensely and many languages like Tamil, Kannada and Telugu were developed from Sanskrit.

Architecture and Art
Architecture developed rapidly under the Chola Empire. The temples that were constructed were magnificent to look at. A famous one is the Brihadeeswarar Temple at Tanjore. They formed the cult of Dravidian style of temple architecture. These splendid temples can be still seen at Tanjore and are a living testimony to the intricate style of architecture of the craftsmen of Chola dynasty. Another famous form of art was the bronze figurines that were crafted during this time. The craftsmen used to beautifully decorate the statues with garlands and jewelry while carving the statue itself. Famous examples of bronze statues are the Nataraja and Lord Shiva as Ardhanarishwara.