One of the greatest empires in the history of India was the Maurya Empire. It approximately lasted from 322 - 185 B.C. Most of India was united as a single entity by the great emperor Chandragupta Maurya. His son Bindusara extended the kingdom of Mauryas over almost the entire sub-continent. The Mauryan Empire had the most powerful military force in ancient India. The greatest emperor of the Maurya dynasty was Ashoka. An able administrator and a skillful warrior, Ashoka converted to Buddhism after the gruesome Battle of Kalinga.

The Maurya Empire had smooth administration and efficient rulers. The government was hierarchical and centralized with a lot of staff to make sure that work was carried on smoothly and efficiently. Taxes were collected regularly, trade and commerce was carried on smoothly, citizens were taken care of and the army was always ready for any sort of external aggression or threat. Every province had its own officials who managed administration at grassroots level. The economy was agrarian and the main economic activity of people was agriculture. The capital city of Magadha was beautifully decorated and had all facilities that any modern city would have. 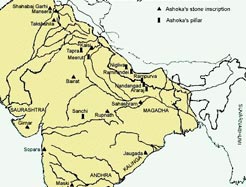 In the Mauryan dynasty, art and literature flourished and the rulers built many famous temples and monuments. Ashoka preached his philosophies in the form of pillars and rock edicts all over northern India. The great advisor Chanakya, who is said to be the driving force behind the fame and success of Emperor Chandragupta, also wrote many great books that have been compiled as literary masterpieces. The Maurya dynasty also saw the rise and fall of many different empires in the south of India. There was constant struggle for power and control of the Deccan region and central India among various small rulers.

The Maurya Empire started to disintegrate towards late 2nd century. The north of India broke into a series of chaos and this situation attracted many invaders who crossed the border to establish their kingdoms. The rulers were busy fighting among themselves and exhausting resources when they should have checked external aggression. After the death of Ashoka, the disintegration had started and worsened by 3rd century.

Asoka the Great
One of the greatest emperors of all times, Emperor Asoka was a Mauryan ruler whose empire spread across the Indian sub continent and the present day Pakistan and Afghanistan thus covering a vast area. He is known as Asoka the Great since he was one of the most able rulers who ruled India.

Asoka Dhamma
After converting to Buddhism, one of the greatest emperors of India, Ashoka disseminated the teachings and knowledge of the Buddhist scriptures. Ashoka always had belief in morals and principles and had high ideals in life. These came to be known as Dhamma of Emperor Ashoka.

Asoka Pillars
Asoka's pillars are basically a series of pillars that are spread all over the northern part of the Indian sub continent. These pillars were set up during the time Emperor Ashoka reigned in India. Most of the pillars, though damaged to some extent still stand upright and are protected by the concerned authorities.

Chanakya
One of the greatest figures of wisdom and knowledge in the Indian history is Chanakya. He is estimated to have lived from 350 - 283 B.C. Chanakya is touted as the "Pioneer Economist of India". Chanakya was the adviser and Prime Minister of Emperor Chandragupta.

Asoka Rock Edicts
Asoka was one of the greatest emperors of India. His high ideals and philosophies are inscribed in the form of rock edicts all over northern India. The Ashokan rock edicts are basically a collection of 33 inscriptions that are carved on the Pillars of Ashoka along with big boulders, caves, etc.