The socio-economic conditions during the 6th century BC led to the rise of many heterodox sects in India and Buddhism was one of them. Buddhism forms an important part of Indian history and culture. Buddhism is a religion that is based on Dharma and Philosophy. It was started by Siddhartha Gautama more popularly known as Lord Buddha. The word Buddha essentially means the "Awakened One". The teachings of Buddha have been preserved till date and are essentially in Sanskrit and Pali language. The history of Buddhism dates back to almost 2500 years and was established around the 5th Century B.C. In this section, we give an introduction to Buddhism and cover the important aspects of Buddhism religion.

A Buddha is basically described as a person who "wakes up" from the "sleep of ignorance". This is done through constant efforts such as meditation and abstaining from materialistic pleasures. The person realizes the true meaning of reality without any help from others and lives the rest of his life preaching knowledge for the benefit of others. A person who wants to attain inner bliss and true happiness should stay away from all worldly pleasures and do meditation in order to tame the mind. Nirvana can be attained by following the Four Noble Truths that lead you to the Eight Fold Path of nirvana. 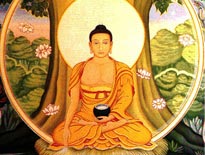 The Eight Fold Path
The Eight Fold Path basically explains the way to end suffering and attain Nirvana. It is also known as the Middle Way as it lies somewhere between total intemperance and total asceticism. It is about seeking the bliss through a way that makes not just the soul but also the body relaxed and peaceful. The Eight Fold Path is as follows: