The 24th and last Tirthankara of the Jains, Lord Mahavira is much revered among the Jains. His teachings and philosophies continue to inspire numerous people even today. He was born in a royal family and denounced his royal family life to attain spiritual knowledge like the Buddha. He was named Vardhamana Mahavira because when he was born his father, king Siddhartha prospered like anything. Vardhamana means increasing and the king credited his growing success and prosperity to the birth of his son. The life of Swami Mahavir is very interesting and is given here as a short story.

Lord Mahavira was born roughly around 599 B.C. He was born in the royal family of Kshatriyakund, a part of the republic of Vaishali. His father was King Siddhartha and his mother was Queen Trishala. It is said that when the queen conceived Lord Mahavira, she had fourteen auspicious dreams that were a premonition of the greatness of the child that was to be born. The prosperity of the King grew day by day. The king attributed his success to his new born child and named him Vardhamana, which means "ever increasing". 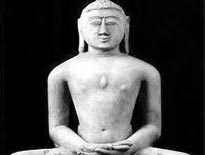 Vardhamana had a lavish childhood and lived like a proper prince. He did many great things in his childhood like saving his friend from a poisonous snake, fighting a monster, etc. that proved that he was no ordinary child. This earned him the name "Mahavira". He was born with all worldly pleasures and luxuries but somehow he was never attracted by them. When he was in his late 20's his parents died. That is when he decided to become a monk. He left all his worldly possessions including clothing and went into seclusion to become a monk.

After 12 years of strict meditation and ascetic lifestyle, he finally gained enlightenment and spiritual knowledge and came to be known as Lord Mahavira. He gave up food and learnt to control his desires and wants. After gaining enlightenment, he preached what he had learnt to all those who needed it. He traveled far and wide barefoot spreading his divine knowledge and words of wisdom for thirty years. Numerous people were inspired by him and converted to Jainism. He left his mortal form around 527 B.C at the age of 72. The Jains celebrate this day as Diwali the day when Lord Mahavira attained liberation is the last day on the Hindu calendar that is celebrated as Diwali.